A Triumvirate of Heartwarming Horror

"There is this ancient myth surrounding our anus," the wacko hypnotist says as he rifles through the pages of some dusty archaic volume. "There it is: the myth of our anus."

That line, from last year's Bad Milo, works for three reasons. First, it's not the least credible moment in a low-budget, lower-brow horror-comedy about a man who develops a two-foot murderous polyp that escapes from his intestine to act as a hitman for his seething subconscious. Second, it's delivered by the inimitable Peter Stormare, who never met a line of dialogue he couldn't chew up and spit out on his return trip to some Swedish nuthouse. And third, the scene is familiar to any fan of horror who has waited patiently while some omnipotent character explains the premise to a protagonist (and, by extension, the audience) just before the climax. It's the astral-projection exposition from Insidious filtered through a steaming layer of scatalogical, pseudo-mythological nonsense. 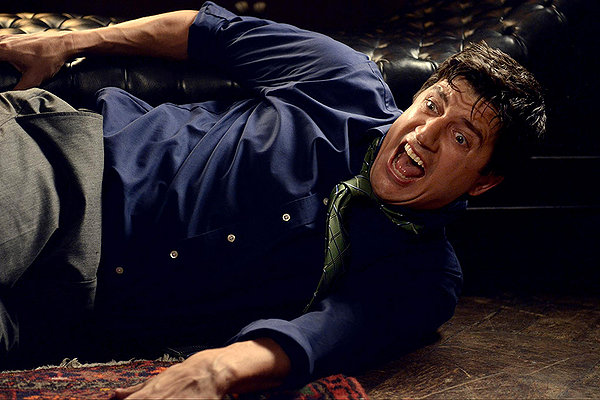 
It also poses a challenge to Hollywood: How can studios scare -- let alone surprise -- audiences when financiers demand that filmmakers stick to slight variations on profitable concepts? Horror exists in the new, whether that stems from entirely new concepts or the drastic revision of the old, which Bad Milo does in spades, tossing Basket Case and Office Space into the idea blender and serving up what comes out. But regardless of the budgets, horror films face another problem: Given that isolation is the backbone of American terror, how can writers separate characters from a world that's better-connected than ever before? Technological globalization appears to have dried up the wellspring from which horror writers dredged new anxieties. Offhand, I can think of two ways to quickly contact our British editor. Why wouldn't I be able to call 911 to report a stranger in the house?

There wasn't a single mainstream horror film that answered that last question satisfactorily, much less played on the connectedness itself. The Purge works, if you can buy that America would ever sanction violence one day out of the year and Ethan Hawke could be the hero of anything. World War Z celebrated globalization, but proved there is nothing less terrifying than PG-13 zombies shambling through the filmic equivalent of a particularly repetitive videogame. The young morons of Evil Dead remained isolated for bullshit reasons and then crashed their only working car. Insidious: Chapter 2 refused to even address the question, as did James Wan's other 2013 horror flick, The Conjuring, which found refuge in the 1970s. Carrie came closest, weaving cyberbullying (and maybe Wikipedia) into a film that seems otherwise rooted in the pre-cell phone past. 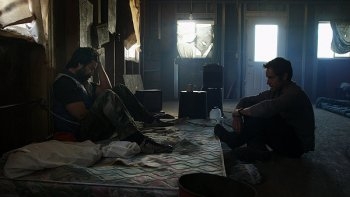 Male bonding is terrifying.So, yeah, Hollywood kinda lamed out this year. And ironically, that very connectedness and technological advancement allowed indie filmmakers to pick up the slack. The three best horror films of 2013 share some surprising commonalities: They all played festivals in previous years, only to re-emerge through VOD or delayed distribution; they're all horror-comedies, leaning heavily towards the latter; they were all made for $1 million or less; they all provide plausible ways to isolate their characters; and they all put their big-budget counterparts to shame. And surprisingly, Bad Milo -- despite its abundance of ideas, go-for-broke energy, inventive puppetry and infinite charm -- isn't among them. The top three are that good, trading on horror tropes to challenge and entertain audiences even if they're not particularly scary.

The best, of course, was You're Next, which played at the 2011 Toronto International Film Festival, where it was purchased by Lionsgate and shelved for two long, agonizing years, despite enthusiastic praise from genre critics. The party line was You're Next had completely reinvented the home-invasion thriller and painted on a fresh layer of humor. Of course, those critics tend towards hyperbole. And the truth is, You're Next isn't entirely original, borrowing aspects of its premise from the 1971 film A Bay of Blood -- not to mention a quintessential mystery novel, which will remain unnamed to protect the film's secrets. But the use of a cell phone jammer, which prevents its characters from calling 911 from their secluded country home, is such a head-slappingly obvious device, I'm surprised it isn't used more often.

If the rest of the film, which mines family dysfunction for humor in the most unlikely circumstances and eventually becomes a reverse slasher film when a few of its (three-dimensional!) characters subvert their archetypes, weren't so damn refreshing, we might look closer at that jammer and see it for what it is. Alas, in sharp rebuke to The Purge, which only gets decent in its second half, You're Next is so much fun, we're not looking for the glue in the premise. That's the profit of synergy among a cast that includes several indie filmmakers -- Simon Barrett, Larry Fessenden, Calvin Reeder, Amy Seimetz, Joe Swanberg and Ti West -- and Stuart Gordon regular Barbara Crampton, all of whom are having a helluva lot of fun while pouring dozens of ideas into a film that seems like a great leap forward for director Adam Wingard, whose previous films are nowhere near as accomplished as You're Next. This is a film that defies the thematic constraints of connectedness while reaping its benefits, and it should serve as a signal fire for mainstream filmmakers who toil in isolation and fail to harvest the fruits of repeat collaboration among friends and muses. 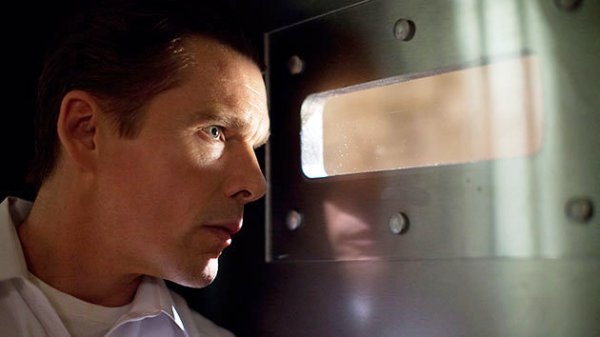 Oh yeah, we remember this garbage.


That vibe carries through my other two favorite horror flicks of 2013, Resolution and The Battery, both of which repurpose familiar tropes to explore the nature of the genre itself and the bonds we maintain in difficult circumstances. Resolution is the remake Sam Raimi's Evil Dead trilogy deserved, as two former best friends clash against some omnipotent evil (or multiple omnipotent evils) while one forces the other to kick his meth addiction in a trailer parked on sacred Native lands. Not to mention the cache of ominous artifacts in the crawlspace, a lake that's frequented by cultists, a cave beset by the homeless and mountain lions ... and ...and ... and. Much like The Cabin in the Woods, it's a Pandora's box of horror tropes dangled before audiences as possible untimely ends for two characters we grow to love. As the schlubby, wise-cracking meth addict, Vinny Curran tosses out hilarious asides with such conviction, they feel improvised.

Similarly, Jeremy Gardner essays another lovable schlub in The Battery, which follows two minor-league baseball players as they attempt to carve out a new life in the aftermath of a zombie apocalypse. The team's catcher, Gardner's character finds a sense of purpose as he adapts to the lonely life of foraging and killing the odd, shambling zombie. Meanwhile, his companion longs for creature comforts and insists they follow a radio transmission that promises sanctuary. This conflict leads to one of the most touching sequences of the year, genre be damned, as -- out of gas and stranded after running afoul of bandits -- the pair bury the hatchet by drinking the last of their hooch in the back of a station wagon while zombies swarm the car and gently rock them back and forth.

Let's set aside the fact that no one, working inside the mainstream or out, has figured out a way to make always-on access to everything scary. As it stands, the hashtag and the friend request are the antidote to terror. But the definition of horror is not limited to "that which frightens." More importantly, horror serves as a dark mirror of society and a portrait of human relationships in extremis. Can the dysfunctional family band together once animal-masked strangers fire a volley of bolts through their dining-room window? Can estranged friends repair their relationships in the face of a variety of evils? Those three films have the answer. While The Conjuring has the power to scare (nevermind that it celebrates the two biggest frauds in the bullshit history of parapsychology), Insidious: Chapter 2 has an admittedly great twist, Evil Dead sports some impressive practical effects, strong performances make Carrie worth watching and Dark Skies is an effective demonstration of the power of foley work, all of those films serve to establish a new axiom as we plunge into 2014: Studio screenwriters should put down their fucking phones once in awhile and chat with their friends. They might learn a thing or two about the true meaning of connectedness.