Rise of the Planet of the Apes; The Change-Up

EXPECTATIONS: The advertisements for this movie contain two things I am sick to death of: Jason Bateman and the phrase "From the people who brought you The Hangover." Yes, Hollywood, The Hangover was a very successful movie, but for the past three years, you've been using that line to hoist sub-par crap on us that people would never pay to see otherwise, like Due Date, or The Hangover Part II. There's only so long you can ride that goodwill train before people will lose interest in seeing a movie because it used the same catering company as a movie they liked years ago. The same goes for you, Bateman. Arrested Development can only get you so far, and you've pretty much used that up with your eighteen movies a year.

REALITY: I think it's necessary for there to be a Freaky Friday-type film about once every two years. It's more than a trope: It's basically its own genre by now. As a result, you don't even have to give reasons or make sense, because we know whats going to happen. They all basically have the same message: "Mothers and daughters are both great in their own ways." "Single life and married life both have their advantages." Just once I'd like to see this happen to random people and have one person's life drastically improve in every way. "I was an overweight accountant from Des Moines, and now I'm a pro surfer! Screw you, I'm not going back!" 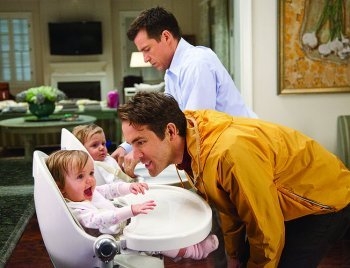 Ryan, stop telling the kids Green Lantern stories. Nobody likes that movie.This time the switch happens to Dave (Jason Bateman), a married lawyer with three children, and his swinging bachelor best friend Mitch (Ryan Reynolds). The entire film hinges on using "because you're married" as a punchline, so we're treated to a ton of gross-out married-life segments. Five minute into the movie, Jason Bateman has baby diarrhea in his mouth. Mitch, meanwhile, smokes a lot of weed and has sex with random women. (Supposedly a lot of random women anyway,; we only ever see one.)

Let's ignore the fact that no one considers maybe the reason Mitch is getting laid all the time and Dave isn't is that one of those guys is Jason Bateman and the other one is Ryan Reynolds. The real problem here is that we spend too much time making Mitch's life look great. We can see why Dave wants to be Mitch, but there is no reason for Mitch to want to be Dave. The movie hints at some issues with Mitch's father (Alan Arkin, who pops in for three scenes, gets his paycheck, and leaves), but none of that makes much of a difference.

I was looking forward to one thing in this film, and that was seeing if its two leads could play against type. The problem is, I realized that they can't play against type, because they're playing the same character. I thought that Bateman's schtick was "I'm neurotic and nebbishy and I talk really fast" while Reynolds' was "I'm charming and suave and I talk really fast." Then you see them try to play each other and you realize: it's the same bit. Reynolds' sketch is just as self-deprecating and obsessive as Bateman's; it's just pulled off better because he's incredibly good-looking. This is "I have a schtick: The Movie," and the only one who can pull it off is Leslie Mann, playing the emotionally distraught, ignored housewife that Leslie Mann always plays. (Leslie, your husband didn't even make this movie, what are you doing here?)

Of course, as we've come to expect from these movies, we learn that each person's life isn't all it's cracked up to be. The problem with this film, and its ilk, is that they think they're proving that everyone's life has good parts, but in order for it to be a comedy, we have to prove that everyone's life actually sucks. Mitch's life sucks because he has no food in his house, and because he takes jobs on Cinemax movie sets sticking his thumb up old ladies butts. (This happens, yes.) Dave's life sucks because he's a workaholic who doesn't spend enough time with his family, and because he's kind of a total wuss.

Of course we go through the scenes where they try and fail to live each other's lives, and it really gives you a sense of how completely unfair this arrangement is. If Mitch screws up, Dave loses his marriage and his career. If Dave screws up, Mitch loses... absolutely nothing. His life is exactly the same. There are no high stakes here. In fact, when the two switch back, Dave does it because he misses his family, Mitch does it because he feels sorry for Dave. You are not providing a reason for sympathy here, movie. 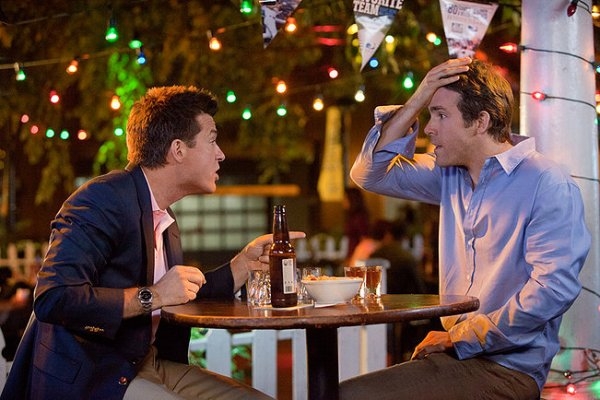 Dude, there's a mosquito on your forehead!

Actually, this movie breaks with convention once, and it's a terrible idea. After the initial round of screwing-up, followed by the inevitable getting-good-at-it montage, the movie goes back in for a second round of screw-ups. No, dammit, movie, we've already been over this. Why are you taking so long to end? As if that's not bad enough, the movie foreshadows the impending failure by literally darkening the skies. There's even a loud thunderclap when the characters say "What's the worst that could happen?" It's as though the movie's target audience is people who have never seen a movie before.

Furthermore, the film defeats its own purpose on several occasions. We're told that Dave has worked all his life to become the amazing lawyer that he is, but how hard can it really be if Mitch can learn to do it in three days? Then we see overstressed Dave finally get to relax by taking a day off in Mitch's body. He eats lunch at a nice restaurant, he goes to the aquarium and the batting cages, he rides go-karts, he does all the things Mitch would never actually do because he is an unemployed actor. There's literally no point to any of these scenes.

There are some funny bits in this movie, I think. I distinctly remember laughing at some points, but several hours later, I can't tell you when or why. That's the kind of movie this is. It's a slog to get through with very little payoff. It's the kind of film that only exists as escapist fantasy, though to its credit, it has done the impossible: For two hours, I did not once wish that I was Ryan Reynolds.

MINORITY REPORT: The only reason I know of Jason Bateman is because I have to. Sometimes I wish I could simply know him as that bland guy in those films I don't watch, but duty dictates otherwise. Or it would if I didn't have someone like Vargo to send out and watch these things instead. - Ian "ProfessorClumsy" Maddison