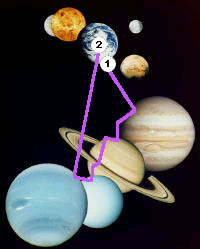 MapQuest gives you the scenic route in this cross-country trip.Whenever I have to leave my house or go to the bathroom, I consult MapQuest with the hopes of finding the quickest possible route. There are a number of reasons I do this, and they all pretty much revolve around me not wanting to invest in a road atlas. Road atlases are expensive, ranging upwards of five American dollar bills. MapQuest is free, meaning it costs me zero American dollar bills. Once again, that’s a savings of five dollars! And that’s in US currency, which looks and tastes better than all other currencies in the world. Except for maybe whatever country used to use those gold-wrapped chocolate coins that pirates would plunder. Those were pretty good.

Example of possible irregularities in MapQuest's directions.Of course the biggest fault is the confusing directions. A recent trip I went on from Northwest Indiana to Milwaukee, Wisconsin included a jaunt through not only a ghetto, but also Tijuana, Mexico. I’m no cartographer, but according to my tiny, novelty-sized Earth replica that’s far south of not only my departure point, but also my intended northerly destination.

In fact, upon closer inspection MapQuest seems to advocate driving as far out of your way as humanly possible. I know it’s just a robot and its 23rd century logic is going to be different from ours. Hell, maybe the roads we use don't exist in the time that MapQuest is designed to serve best. Maybe that disqualifies me from criticizing MapQuest's directions, but I'm a risk taker with nothing to lose. MapQuest's directions are fishy! To pretend to test my theory, I conducted some tests, which are what I do when I want to test things. Initially, the test results were catastrophic. But then I realized I hadn’t actually tested anything and that I was just thinking about last week’s episode of the hit TV show 24. Then I got serious and consulted MapQuest on several possible travel scenarios, getting these shocking results:

I really wasn’t surprised by most of my findings. MapQuest comes with its share of faults. But all and all, these faults are outweighed by the low price tag of zero dollars. Therefore, it remains the brightest and best solution for having the hardest time possible finding your way around this crazy, giant-sized novelty globe replica we call Earth. We salute you, MapQuest!