EXPECTATIONS: I know next to nothing about Nicolás López's Aftershock, a Chilean-American disaster-horror film that attracted a $10 million budget, an "Eli Roth presents" tag and VOD distribution. It's playing in at least one American theater this week, although I'll be damned if I know where, and the premise -- "an American tourist discovers that surviving a 9.5 earthquake is nothing compared to the hell that follows," according to Amazon.com -- is somewhat tantalizing.

REALITY: Eli Roth hates tourists and foreigners, but goddamn does he love his formula.


Aftershock, in which Roth earns co-writer and acting credits, unfolds in the vein of Hostel and Hostel Part II: Tourists go to another country (in this case, Chile), act like jerks and get brutalized by monstrous locals. Later this year, we'll be getting the Roth-directed The Green Inferno, in which Amazonian natives terrorize American college students who fly down to the Amazon to protest deforestation or whatever. Five bucks says the natives kill and eat a giant turtle, with a ten-dollar kicker if Roth just slaps a new title card on Cannibal Holocaust and calls it a day. 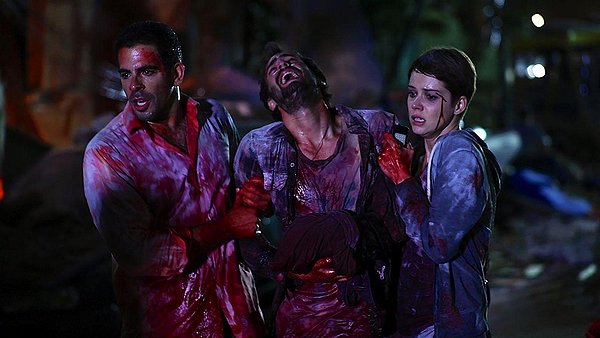 Oh, such devastation hath rendered us crowned in crimson blood.


Perhaps because Roth didn't actually direct Aftershock (he shares writing credits with director Nicolás López and Guillermo Amoedo, who co-wrote The Green Inferno), Aftershock gets a couple twists that separate it ever-so-slightly from Roth's own films: The number of American protagonists drops to three (there are six, but two are Chilean and one is Hungarian), and Aftershock is inspired by an actual event, the 8.8 magnitude earthquake that killed 525 people in 2010 and sparked a tsunami that laid waste to the Chilean and Japanese coastlines.

However, the focus isn't on the earthquake. Instead, the writers highlight Chilean natives' post-earthquake hostility toward Gringo (!) (Roth), an American single dad looking for love in Chile, and Kylie (Lorenza Izzo), an American alcoholic who travels to Chile with her Hungarian half-sister. So, sure, the cast is international, but the Heart of Darkness narrative is distinctly white and European. Gringo's Chilean friends, Ariel (Ariel Levy) and Pollo (Nicolás Martínez), are even sleazier than Gringo; Ariel encourages Gringo to employ pickup artistry in his pursuit of Chilean tail.

Gringo's awkwardness and sexual failures (he's rebuffed by Selena Gomez of all people) drive the first 34 of Aftershock's 89 minutes. The point is clear: Gringo's a doofus, if not a complete asshole, and his amateur-hour sex tourism and Kylie's self-destructive alcoholic behavior have made them both prime targets for brutality once the narrative goes from Heart of Darkness to The Lord of the Flies. Then, the earthquake hits, as Gringo & Co. party up in an underground nightclub. 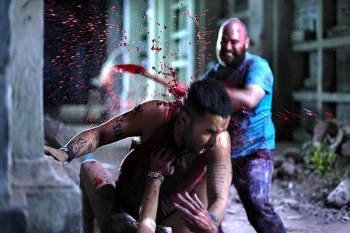 With thus such a strike do I smite thee!The marketing execs shroud the last 40 minutes in mystery, asking audiences to imagine what horror awaits our protagonists once the earth stops shaking and they reach the surface, but I don't think it would be spoiling too much to say it ain't zombies, ghosts, vampires, werewolves, chupacabras, Outer Gods, Other Gods, sea monsters, landsharks, giant ants, spiders, sludge monsters, orcs, mermen, dinosaurs, bats, carnivorous worms, toothed vaginas, aliens or anything else that exists only in our imaginations.

Nope. As Sartre said, "Hell is Chilean people" -- specifically, Chilean gang members playing survival of the fittest by raping and/or robbing anyone who isn't a Chilean gang member. They lack no higher purpose. These aren't the sadistic aristocrats of Hostel's hunting club. There's no dark satire bubbling beneath the surface. After a mildly irritating first act and a legitimately riveting earthquake sequence, Aftershock becomes a study in standard-issue savagery, which would be fine if Aftershock were marketed primarily toward Chileans.

Unfortunately, Aftershock hasn't been slated for a Chilean release (strangely, however, it's playing in Kuwait), and the majority of its dialogue is in English. Whatever López's aim when Aftershock went into production, his film now serves only to confirm Americans' xenophobia -- more specifically, Eli Roth's.

That's a shame, because, beneath the nihilism and xenophobia, Roth has helped to bury a beautifully lensed film with a wonderfully ironic final shot. López, acting as his own cinematographer, demonstrates a knack for balancing colors, especially in the UV-lit underground nightclub, and finding interesting angles. And he can apparently find his camera's white balance settings, which is a welcome relief after a decade of poorly lit, digitally shot indie horror flicks (see: Turistas). Now, let's see what López can accomplish once Roth leaves him and Chile alone -- and which country Roth will target next.

I know someone who claims to have met a drunk Eli Roth one night. Supposedly, Roth complained the whole time that he was tired of films, and if it were up to him, he'd stop making them entirely and focus his time and energy on his real passion: the Haunted House-themed nightclub he owns in Las Vegas. I have never once doubted the validity of this story. - Martin R "Vargo" Schneider