Alf was captured by federal agents. In the final moments of Dinosaurs the family huddled together as the world ended. These are some of the most well-known examples of tv show endings taking surprisingly dark turns. But they're not alone. 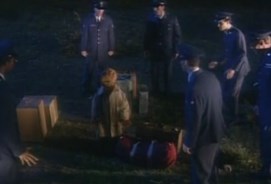 At the urging of Jack, Hurley agrees to take one more look at the map. "Oh," he says, then rotates it ninety degrees. Turns out they should have taken a left at Albuquerque.

In the finale of the second season, Dexter finds out there will be several more seasons. (See also: Sons of Anarchy)

The scene from the opening credits is re-enacted. Chandler, Ross, and Joey jump into the fountain. Phoebe, Monica, and Rachel jump in at the same time, hoping their combined blue gaia will offset the guys' planet-devouring red gaia. The gambit is successful and the Earth goddess is safe, but the friends have sacrificed themselves in the process.

Walter gets caught by the police. He is tried and convicted for all his crimes. As punishment, he is forced to clean up the pizza that he threw on a roof.

Star Trek: The Next Generation

A giddy Picard commands the pilot to do a make the Enterprise climb at a steep angle. Data warns Picard that such a maneuver could stall the spaceship, but Picard insists. The Enterprise stalls and enters a freefall from which it never recovers, exploding in a loud fireball.

The grand jury concludes that if the bomb squad hadn't spent several minutes dancing and singing, the device found beneath the Super Bowl bleachers could have been defused.

Sam does the glass polishing motion with his hands, but finds that the glass he was polishing has been worn down to nothing. He turns to the rack. Every glass and mug is gone. Sam's right hand twitches, the bar towel flapping eagerly. He eyes Norm and Cliff. "Carla," Sam croaks, his voice little more than a whisper, "lock the door."

Tony goes out in a blaze of glory, taking out all the federal agents as he defends the constitution in an Oregon wildlife refuge.

Jim turns toward the camera, mugs, and serenely lets himself fall backwards into an industrial cauldron of lava.