Ian "ProfessorClumsy" Maddison watches with bated breath as Ridley Scott loads the 436th film adaptation of Robin Hood into his cinematic bow and takes aim. After some suspense, this critic declares the film hit its target.

EXPECTATIONS: I have a special place in my heart for the works of Ridley Scott. However, for every Blade Runner there is a G.I. Jane; for every Alien, a Gladiator. Some claim Robin Hood offers a bold new take on the legend, while others have jokingly christened it Gladiator in England. I don't see that resemblance myself, or maybe I refuse to. There's always hope...

REALITY: Robin Hood turned out to be something of a treat. Playing merry hell with the Hood mythos might seem a little blasphemous to some, but what Ridley Scott has done is made a very entertaining morality play. It's simple, well-paced and as hammy as a butcher's shop. 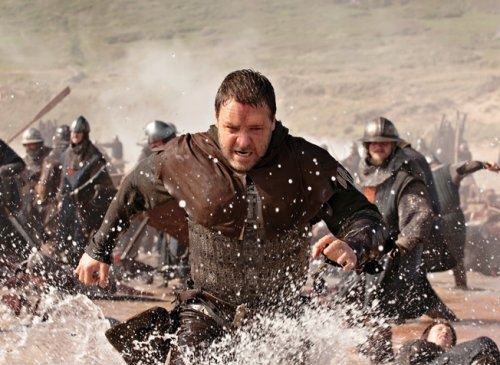 I bet you wish you'd lost that weight for the role now don't you, Russell?

During the Crusades, a young and energetic soldier known as Robin Longstride (played by a fat, old Russell Crowe) offends his king by suggesting that massacring innocent people is somehow wrong. For this heinous act, he and his friends are put in the stocks, only to escape and form a band of "merry men." During their getaway, they stumble upon a French ambush led by English traitor Godfrey (rent-a-baddy Mark Strong). After fighting off the Frenchies, they discover that the king is dead and that the now-dying Sir Robert Loxley had been charged with returning the crown to England. Robin steals all of his things and decides to return to England in his place. Not only does he get away with this, but also Loxley's dad (Max Von Sydow) thinks it's a really good idea and he should do it full time. Hell, he should even be intimate with Loxley's wife Marion (Cate Blanchett). It sounds silly because it kind of is. However, all of this is presented at such a break-neck pace and delivered with such knowing over-the-top conviction that it works. 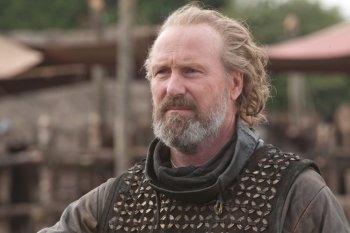 Every article needs a picture of William Hurt. You know, for the ladies.As Robin establishes himself in Nottingham, recruiting the frequently soused Friar Tuck (Mark Addy) and his loyal bees into the fold, he starts to solve problems for the new King (Oscar Isaac) by stifling the outgoing taxes. It all gets very political from here on, exploring the idea of throwing this mythical figure into a time when England was undergoing severe changes. King John is torn between the maniacal, scheming Godfrey and the moral, progressive William Marshall (William Hurt), and it is upon his shoulders that many of the more difficult decisions that drive the narrative lie. Just as well, then, that Oscar Issac delivers a performance that is both complex and ridiculous with great aplomb. By the time we reach the end of the film, you won't know whether to cheer or boo for him.

The rest of the cast applies itself equally well, for the most part. Mark Strong is as good as ever in his grimacing bad-guy mold, which makes me wonder what went wrong with his performance in Sherlock Holmes. Russell Crowe clearly dedicated himself to his accent, which is pretty much dead-on. Blanchett and Hurt are also high-rollers in the game of accentry, which will certainly please British audiences who have an ear for such things. 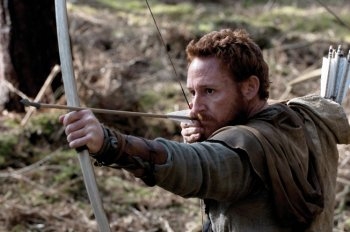 Scott "Grimey" Grimes, a.k.a: The Grimester.The Merry Men themselves are an odd lot, representing the rest of the United Kingdom in that all-too-convenient way that only racist jokes told by old drunks can normally achieve. The Scotsman (Kevin Durand as Little John), the Welshman (Scott Grimes as Will Scarlett) and the Irishman (Alan Doyle as Alan A'Dayle); just saying that sounds like the setup for a terrible anecdote that ends up insulting all three categories. There is a lot of humour to be derided from this trio, usually involving drunkenness and debauchery, but of course they're still Robin Hood's trusted associates with all the action-film mentality that entails. Scott Grimes is a particularly odd choice to play a Welsh character. I had no idea he was supposed to be Welsh until about halfway through the film, so baggy was his accent. It makes me wonder how they went about casting the role. "Let's get that little ginger guy from E.R." Wait, what?

By surrounding the Robin Hood legend with a seemingly subtle political plot, Ridley Scott has given the character more room to play outside of his pre-established formula. And by placing more focus on the political heavyweights and downplaying the presence of the Sheriff of Nottingham (Matthew Macfadyen, serving as little more than a humourous stooge), the filmmakers have given everything a tremendous sense of scale, which is probably the only way they could get away with such an elaborate concept. The problem, though, is that underneath all of this intrigue and action, the film is actually very slight. There's not much to be taken from this other than "be a good man and stand up for what you believe in," which isn't really any deeper than any of the other period action-adventure films that have come out ... ever.

That said, as a precursor to the tale, Robin Hood is fantastically entertaining, and I welcome the inevitable sequel. Assuming Russell Crowe isn't too old by then.

MINORITY REPORT: Robin Hood is for old people. Why the hell would I want to watch a movie about people in the past? I don't remember any of this shit happening. I only watch movies for nostalgia and explosions. And tits. -David "Data Core Devil" del Vacote III