EXPECTATIONS: When I first saw Wolf Creek, Mick Taylor's sadistic one-liners rubbed me the wrong way - his threat to turn someone into a "head on a stick" has stuck with me longer than most things I see or hear - but, as time wore on, I grew to appreciate the beautiful Outback cinematography, the quiet ways in which writer/director Greg Mclean subverted the genre, the pacing and the pitch-black Crocodile Dundee parody. Hopefully, Wolf Creek 2 can at least retain those qualities, even if its distribution model - Xbox VOD - is already rubbing me the wrong way. 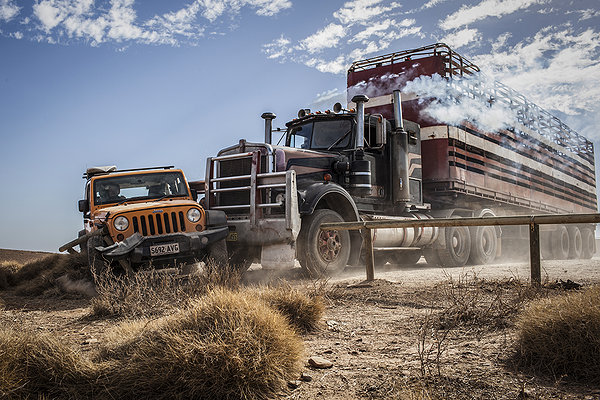 Is this a remake of Duel?

When we catch up with Mick Taylor (John Jarratt), he's cruisin' along the highway in his blue pickup, with a cooler full of dismembered pigs and not a care in the world. The police decide to fuck with him, which makes for a pretty short Choose Your Own Adventure chapter given that Mick isn't very nice to people who don't fuck with him. This webisode-length pre-titles sequence is the best part of Wolf Creek 2: gory, morbidly funny as it references Babe (Babe!) and kinda shocking, even in this post-Human Centipede age. It's all downhill from there. Two German tourists (Shannon Ashlyn and Philippe Klaus) wander into Mick's realm of suffering, followed shortly thereafter by English tourist Paul Hammersmith (Ryan Corr). 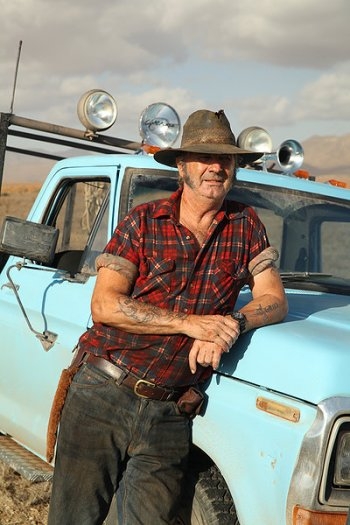 This is what Australia looks like.What happens next isn't very surprising at all, save for a sequence that pokes fun at the rural-horror conventions established by The Texas Chain Saw Massacre and The Hills Have Eyes and another in which Mick offers one of those tourists the opportunity to escape ... if he or she can successfully answer ten questions about Australia. You can probably guess why the test consists of ten questions. Had I been in his or her position, I wouldn't be able to write this review today, unless Mavis Beacon Teaches Toe-Typing is a thing. Oh, and the ending doesn't work, for reasons you'll understand if you ignore this review and watch Wolf Creek 2 anyway.

Rather than amplify Wolf Creek's appreciable qualities, Mclean has instead amplified its least enjoyable aspects. The cinematography is still gorgeous. Babe has supplanted Crocodile Dundee as the satirical touchstone, with diminishing returns. Wolf Creek 2 is less subversive, with characters who do exactly what they shouldn't do. Conversely, Wolf Creek 2 is more nihilistic and Mick is more misogynistic, sadistic, xenophobic and confusing than ever. On one hand, going on my limited knowledge of Australian culture, I'm pretty sure Mick's supposed to be an anti-immigration/pro-rape conservative-yobbo caricature. On the other, I think Mclean wants us to like Mick on some level - at least, I think we're supposed to enjoy his antics - and that makes me queasy, especially when Mick's threatening to use his knife to "make a woman," trying to rape women, calling a victim his "plaything," etc. I'll admit it: I laughed at a few of his non-rape-y one-liners, especially regarding his opinions of the British, but the net result is the same dirty feeling that persisted after the Nightmare of Elm Street remake, which sets up a weird dynamic: There's a sick man inside of me who will laugh when killers joke 'bout killin', but when it's rapists jokin' 'bout rapin' ... well, that ruins the vibe. Never before has such a gorgeous movie been so ugly at its core.

That said, Wolf Creek 2 might play better for someone who's more familiar with Australian culture. I mean, I can trace some of my love for horror to early exposure to RoadGames, but an Australian friend (I'm told they're called "mates") had to fill me in on some of the particulars - hence, my use of the word yobbo in the paragraph above - and there may be a rich undercurrent of satire to which I'm simply unattuned. Australia's involvement in the Vietnam War may inform the subtext. Why the police pick on Mick may have something to do with territorial rivalries. In the absence of subtitles, I missed a few words here and there, and I'm not hip to Aussie slang. Nonetheless, I'm not sure such familiarity would compensate for Wolf Creek 2's myriad shortcomings, especially when it comes to Mick's position within the narrative or the muddled sexual politics explored in the final reel. Maybe history will repeat and I'll feel differently about Wolf Creek 2 a few years from now.

Maybe. But I doubt it.

MINORITY REPORT: Everything I know about Australian culture I learned from Peter Weir's The Cars That Ate Paris. Over there in that Australia they trap people in small towns and treat them like cars. Then they drive into walls. Australia. Also, kangaroos and Mel Gibson are from there I think. - Ian "Professor Clumsy" Maddison