EXPECTATIONS: I am excited for this one. The Frozen Ground marks the reunion of Con Air stars Nicolas Cage and John Cusack, two actors of whom I am particularly fond and who aren't afraid to give it the beans and go all-out crazy. It always intrigues me, too, when a director (in this case New Zealand-born Scott Walker) is able to gather a cast of this strength for their first feature film, so there's a lot here to pique my interest.

REALITY: The Frozen Ground is a very good film that I think a lot of people will find extremely off putting, and understandably so. This is grim stuff, dealing in the seedy side of life in unflinching and often exploitative ways; the fact that it's based on a true story makes it even more so. In spite of (or perhaps because of) that, it works very well. You could almost imagine a smirking shithead telling you this story because they know it will shock and offend you, but you'll be compelled to listen anyway. In the end, this turns out to be true, but we'll get to that in due time. 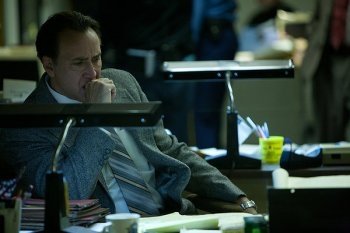 Whoa, rein it in there, Nic. Is this guy crazy or what?The film begins with prostitute Cindy Paulson (Vanessa Hudgens) being rescued by police after escaping serial kidnapper, rapist and murderer Bob Hanson (Cusack). When a lowly police officer escalates the matter to the Alaska State Troopers, it ends up in the hands of Sgt. Jack Halcombe (Cage) who finds that in building his case against Hanson, his biggest obstacle is the legal system itself.

Ostensibly a police procedural, The Frozen Ground spends a lot of time dealing with Halcombe's frustration. He's frustrated with his co-workers who can't come up with vital evidence, he's frustrated with his superiors who can't get him a warrant, he's frustrated with Paulson for not opening up to him and he is frustrated most of all with Hanson for being a blatant rapist and murderer while brazenly lying about it. Of course he's frustrated, the justice system as portrayed in The Frozen Ground is not conducive to investigative police work. He and his colleagues know exactly who the killer is very early into the proceedings, but of course they cannot make an arrest or even follow up on leads because the system won't allow them to do it. They have to pursue other avenues of investigation which of course prove unfruitful and just lead to more frustration when they see this man, already a convicted rapist, have evidence piled up against him and dismissed as circumstantial. What makes it even more interesting is that it isn't portrayed as a symptom of corruption or anything like that, it is simply a broken system that just doesn't work. It's rare to see a film approach this subject in this way. Usually, you would just have a detective look into the camera during his epiphanous moment before the third act and then cut to him arriving at the killer's house. Lt. Columbo never had to deal with the system, he just showed up at the suspect's house every day to annoy them into a confession. I think there's probably more truth to this version of events.

I mentioned earlier the strangely forgivable exploitative edge to this film. It's weird at times, because the film shies away from graphic scenes of violence or sex, but has no problem showing nudity, drug abuse and scenes of women in compromising positions; indeed, the objects of exploitation we encounter every day, turned up to an extreme degree. We are presented with the seedy world in which women are a commodity and crystal meth is handed out idly. It should be stated also that the only black character is a pimp played by Curtis "50 Cent" Jackson. Now, 50 Cent's performance is surprisingly human, he's certainly developed as an actor since his semi-autobiographical debut Get Rich or Die Tryin', and he is also a producer on this film. Now, with that in mind, we have to assume that 50 Cent understands exactly what this film is trying to do. When we first see him with his ridiculous hair and stupid jacket, we immediately identify him as a movie pimp, but he plays it with such understated humanity, it's like he's a real person. He even tries to redeem himself in the third act. We cannot ignore, however, that the only black character in the whole film is a pimp. Well, this is because - as is explained in the film's closing titles - the film is narrated silently by Cindy Paulson, or perhaps more accurately, narrated by a caricature of Vanessa Hudgens. 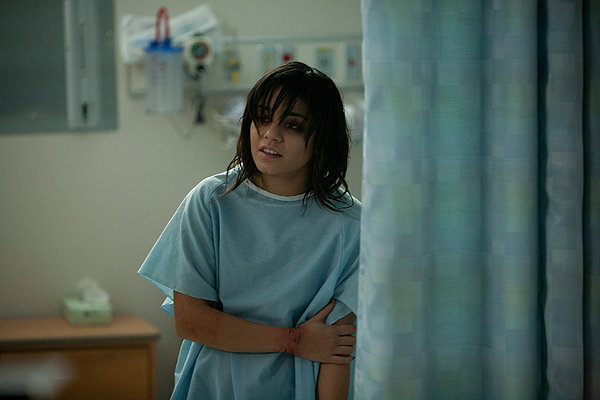 Hi, I'm Vanessa and I'll be your smirking shithead narrator this evening.


In an interview, Hudgens has claimed that she wanted to "play a prostitute and do drugs" in a film since she was twelve and it's certainly the modus operandi for former Disney stars to get as edgy as possible when they hit their twenties. Scott Walker is obviously playing all of this up, having Hudgens smoke crystal meth, dance in her underwear, refering to 50 Cent's character disdainfully as "my nigger" and generally behaving in the kind of arrogantly worldly manner that makes your eyes roll uncontrollably. Then, by attributing the story as her account ("This is the first time she has told her story," we are told), Walker assures us that it is she who is the aforementioned smirking shithead. And then subtly lets us know that, yes, there is a difference between the real Cindy Paulson and this fictionalised version played by Vanessa Hudgens, the actress who always wanted to play this very role. It ends up coming across as a story being told supposedly to horrify you, but really it's just to make the teller look cool. Her frustrations personify into Halcombe and the self-awareness of her forced edginess personifies in the disgusting Bob Hanson.

As interesting as of this stuff is, John Cusack's performance as Hanson is the real selling point. He steals every scene he is in, even the ones he shares with Cage, who is remarkably reserved here. Cusack is frightening in his wild-eyed villainy, but it's in the scenes where he defends himself that he is most compelling. In these moments, he is reminiscent of Peter Lorre in Fritz Lang's brilliant early-sound thriller M. In that film, Lorre's Hans Beckert insists that he has no choice in his actions, that he must kidnap and murder young girls, as though some other will is driving him in that instant. Cusack's Hanson claims something similar, only to contradict, dismiss and lie about that claim moments later. In both cases, the performances of the actors involved forms the central focus of the final act. It is in looking and trying to understand that we realise we cannot, we can only fear.

MINORITY REPORT: Deep down, I always figured this is what ultimately happened to John Cusack's characters in all those romantic comedies he used to make. - Joseph "Jay Dub" Wade