EXPECTATIONS: Oh man, are we in midsummer already? Late July is to mediocrity what early January is to pure crap. And so it makes sense that we receive this, an undesired sequel to an unmemorable film. I'm not saying I didn't like the first Red, I'm saying I have no feelings about it one way or the other. It was a film that was so middle-of-the-road it barely warranted an opinion, let alone a sequel. Still, I will gladly pay money to watch Helen Mirren doing anything, and "blowing stuff up" is one of the best things Helen could be doing. Also, we're adding Dean Parisot, who made the incredible Galaxy Quest, and also The Good, The Bad, and The Weird's Byung-hun Lee is joining the cast, so if nothing else, this should at least be fun.

REALITY: And so it was. It was fun. I mean, not like Disneyland-fun, or even like, Disc Golf-fun, but it is certainly above pushing-a-toy-car-back-and-forth-on-the-coffee-table. In fact, I would say it is about as much fun as a game of Apples to Apples. Played while sober. With your mom in the room. Yes, that is the level of fun that we're at here. And that's, y'know, definitely fun, in some special way.

Red 2 starts off with Bruce Willis being too old for serious action, which is the way Bruce Willis has been in every film for the past 25 years. Willis reprises his role as Frank Moses, a Retired Extremely Dangerous ex-CIA agent who wants be left alone and live life with his girlfriend Sarah (Mary Louise Parker). Unfortunately, Moses' former partner Marvin (John Malkovich) shows up to tell him that they are both in danger, because someone's coming after a weapon that they may have seen at some point in time or something. Anyway, like every paranoid person in every movie, Marvin is completely right, and soon the three of them are on a worldwide hunt to find the weapon's creator, Dr. Bailey (Anthony Hopkins).Meanwhile, they are pursued by Frank's former friend Victoria (Dame Helen Mirren), current enemy Han (Byung-hun Lee), and a low-rent Jack Bauer (Neil McDounough). Also, Catherine Zeta-Jones is there to do what she does in every movie, which is "Make me wonder why Catherine-Zeta Jones is there." 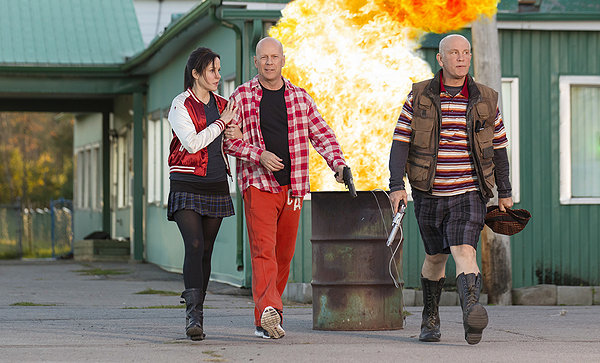 Trying too hard to be funny 101. Red 2 is not a particularly complex film, nor does it try to be. Normally I'd say this is fine, but it's also not a particularly interesting film because of that. The plot points are derivative and generic, and it is determined to spend the most amount of time on the least interesting points. Maybe it's because Mirren is miles above the rest of the cast, but I'd rather just watch an entire movie dedicated to Victoria's no-nonsense taking-care-of-business style than see John Malkovich and Bruce Willis bicker about how old they are. In fact, if nothing else, the Red franchise is excellent for setting up Helen Mirren as an action heroine. Mirren is perfect for this, because she always has an air of dignity and respect about her, but she also always appears to be having fun and not taking herself too seriously. She's an intellectual heroine, and honestly if Liam Neeson has tricked us all into thinking that he's an action star at this phase in his career, then why not The Queen? (Idea: Remake Mr. & Mrs. Smith with Neeson and Mirren. WHY THANK YOU HOLLYWOOD I WILL TAKE MY BAJILLION DOLLARS NOW THANKS.)

Furthermore, Byung-hun Lee is also more interesting and charming than the rest of the cast, as a contract killer who wants to save the world, but also really, really hates Frank Moses. The film fails to properly explore his motivations except in a few passing lines, but it does let him punch and kick a bunch of people, and he's really good at that. Except when it comes to Bruce Willis. See, as much as the movie reminds us that Han is a ruthless unstoppable killing machine, whenever he pops in to remind us that his storyline exists, and he and Frank face off, he never really seems like that much of a threat. That said, Lee and Mirren get exactly one action sequence together, and it is one of the most fun and entertaining moments in the film. It's the scene that makes you point and say "Now, why couldn't the rest of the movie be like that?" 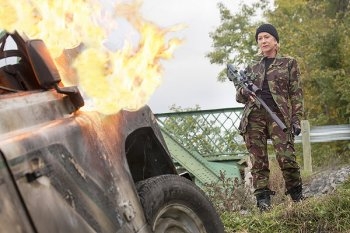 Vargo has been staring at this picture for hours. I don't know why."So what does the movie focus on, then?" You might ask. The answer is that, well, it doesn't really ever focus on anything, that's the problem. This is a 115-minute movie that has five different antagonists through its runtime. (Wait, six! I forgot David Thewlis shows up for like five minutes.) It's bloated and boring, and you could have cut entire characters and made a cheaper and tighter movie. My recommendation would be Catherine Zeta-Jones, but then it usually is. In all of this, though, we do find time to go through this ridiculous routine over and over again: Sarah: Heeeeeey, I wanna do spy stuff! Frank: No, honey, you can't do spy stuff! *And then Sarah does spy stuff* This annoying WAAAAH RICKY I WANNA BE IN THE SHOOOOWWW tripe is most of the film, unfortunately. And if you read that and thought "Gee, I bet she's going to stop being competent just in time to get kidnapped by the bad guy!" Then congratulations, you've seen movies before.

Credit where it is due, Parisot does put together some great and varied action sequences. An early fight where Frank stealthily dispatches seven soldiers one-by-one, Metal Gear Solid style is completely different than Han's martial arts scenes, which are also completely separate from Han and Victoria's car chase/shoot-out. I wished that Parisot brought the warmth and humor he showed in Galaxy Quest to this film, but instead he apparently focused on honing his skills as an action director. If he ever utilized both, he could be one of the most interesting directors today. But unfortunately, limited on time and budget, none of these action sequences lead up to anything. The third act results in a fairly weak anti-climax that introduces things which look like they might be kinda cool, then does nothing with it.

Yes, we can all praise the chemistry between these actors we all enjoy. But having a great and fun cast means nothing if you don't do anything with them. In addition, and this is a common action movie trope, but also a pet peeve of mine, the movie never addresses the consequences of its own actions. While attempting to locate the weapon, Frank and his team very blatantly break into the Kremlin, followed by launching a public attack on an Iranian embassy, killing multiple people who weren't involved in the plot at all. These are international incidents which would almost certainly start World Wars III and IV simultaneously. In this regard, Red 2 is actually one of the darkest comedies I've ever seen, about a rag-tag bunch of heroes who set out to save the world and instead wind up assuring its destruction. This is an original and intriguing premise, which of course means it has no place in this film.

MINORITY REPORT: Every Cocoon needs a Cocoon: The Return to remind us this is all an exercise in cash-grabby sentimentality, entirely dependent on our charitable assessment of the actors' past great works. - Sean "Keanu Grieves" Hanson