Good: Based on the Review of 'Precious' by Macrame_God

EXPECTATIONS: There has been no shortage of 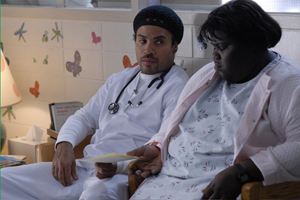 It's hard to caption this without being insensitive. :(buzz for this new film from director Jeff Daniels since it debuted at The Sundance Film Festival in January, when it won both the Audience Award and the coveted Grand Jury Prize for Best Drama. Being the fan of sappy melodramas that I am, I'm expecting Precious will be exactly the Oscar contender that it's being hyped up to be. However, I'm still a little cautious. I've been burned by other highly praised films that came out this year (I'm looking at you, The Hurt Locker).

REALITY: When films like these get limited releases, usually we here in the Paleolithic Age (otherwise known as "The South") get shafted in favor of cities like New York and Los Angeles. However, every once in a while one of these films slips through the cracks and winds up in a theater near where I live, where black folks love their Tyler Perry-style melodrama. Let's be clear: Precious is the Seven Samurai of black melodrama, and I mean that in a good way.

Precious follows the life of Claireece "Precious" Jones (Gabourey Sidibe in her motion picture debut), a 16-year-old black girl living in Harlem circa 1986. Precious' life, as we learn, is plagued by no shortage of problems. She's still in junior high, is obese, is pregnant with her second child (both of which were conceived by her biological father), and is constantly suffering abuse of both the physical and psychological nature from her sadistic mother Mary. (Mary is played by Mo'Nique in an Oscar-worthy performance. No, I'm not joking. It's that good.) 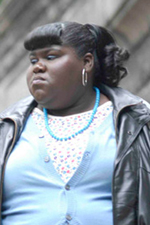 Sidibe will win an Oscar for her menacing stink-eye.Of all the challenges Precious must face on her quest to obtain the dignity she desires, the obstacles that seem to impede her the most are not the ones presented by the world in which she lives, but the ones in her own mind. Precious suffers from a severe case of identity crisis, having been convinced that lighter-skinned people, regardless of race, are inherently better than dark-skinned people. In one particularly heart-breaking scene we see Precious making herself up before she leaves for school, visualizing herself in the mirror as a slender, blonde white girl.

After Precious' school learns of her second pregnancy, school officials transfer her to an alternative school to help her get her GED. She finds her life at a crossroads: Will she give in to the culture of hatred and ignorance to which she has been a victim and become a bitter, shut-in welfare queen like her mother, or will she rise above it all in order to achieve a better life for both herself and her children?

You probably think from reading all this that Precious piles on the melodrama pretty thick. I won't lie: It does. However, great acting from the film's cast keeps the story from becoming a heavy-handed bore. Both Sidibe and Mo'Nique deliver powerful performances that breathe life into their characters, and a supporting performance from Paula Patton as Precious' teacher, Ms. Rain, also delivers. Even Lenny Kravitz and Mariah Carey get to steal the spotlight in a few scenes with their brief, but delightful, performances. Great acting is not the film's only strong point. Precious is generous enough to provide a healthy dose of humor at appropriate times to keep the audience from being crushed under the weight of its themes. One scene where Precious fantasizes about eloping with her math teacher to "Winchester or some shit" stands out as a perfect example.

Best of all, Precious is a story of empowerment. A story as brutal as Precious almost seems as though it's destined to be a crushing Requiem for a Dream-style tale of self-destruction that you can only endure once, but the film provides its audience with a glimmer of hope at the end of its dark tunnel, leaving us with the feeling that even as grim and hopeless as Precious' circumstances may be, there is still a chance for her to rise above her seemingly insurmountable challenges and become the mother and woman she aspires to be.

Precious is currently out in very limited release, and if you have the good fortune to be near a theater playing it then you owe it to yourself to see it. If not, then there might be luck in the future: Precious pulled in an unheard-of $1.5 million in its opening weekend on a paltry twelve screens, so chances are bright for it to expand to other venues. If it comes to yours, make sure to go and see a film that is definitely going to be making waves at this year's Oscars.

Then again, I said the same thing about The Wrestler last year, so what do I know?