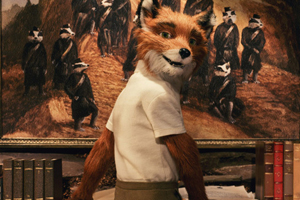 "Daaaad, I told you to knock first!"Wes Anderson film. I have every reason to believe that this Wes Anderson film will be very much like a Wes Anderson film, only animated. That isn't necessarily a bad thing though; I've thoroughly enjoyed Anderson's past efforts and this looks like it is packed with humour and a somewhat nostalgic visual style.

REALITY: This was special: An exercise in pure joy from start to finish. The hilariously deadpan humour and exquisite visuals, combined with a heart-rending, toe-tapping soundtrack make this an absolute pleasure to watch. Wes Anderson has created something truly unique in Fantastic Mr. Fox and you owe it to your inner child to see it.

George Clooney voices Mr. Fox, a professional chicken thief turned newspaper columnist who decides to get back into banditry for one last big score. Mr. Fox and his faithful sidekick Kylie the possum (Wallace Wolodarsky) hit the local farmers Boggis, Bunce and Bean (led by a superb Michael Gambon as Bean) while striving to keep it a secret from Mrs. Fox (Meryl Streep). Meanwhile, Fox's nephew Kristofferson (Wes Anderson's brother Eric Anderson) comes to stay with them whilst his father is ill, much to the dismay of their son Ash (Jason Schwartzman). This just adds to their problems as the farmers vow their revenge.

The aesthetic alone is worth the admission; the textures are beautiful and look like you could reach out and touch them. Many special effects are identifiably made from something else, like the cotton-wool smoke and sugar-paper flames. The whole thing is reminiscent of animated shows like The Wind in the Willows, Button Moon and Bagpuss.

Fantastic Mr. Fox could easily come across as too verbose and intellectual for a young child to connect to, but having seen it twice I've come to a solid conclusion on this: Anderson is not really aiming this at our children, but rather us -- now adults -- when we were children. As a child, I would have lapped this up and asked for seconds, and I think it's important for kids of today to see how we used to connect to animation. Even if they're not enthralled by the script, the visuals should have their jaws dropping. Unless they have no souls, in which case you should abandon your kids on the doorstep of the next cathedral you see.