A Serious Man, or Larry and the Terrible, Horrible, No-Good, Very Bad Life 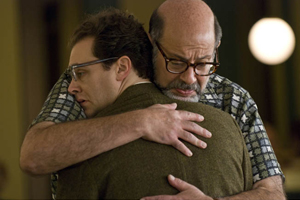 A Serious Manlove develops between some actor you've never heard of and the real-life Bear Jew.Well, it's the latest Coen Brothers film -- set in rural Americana for a change of pace and starring actors that no one's fucking heard of. Michael Stuhlberg plays some professor and Richard Kind (you'll recognize him as that guy who plays annoying people) plays against type as an annoying person. This will probably win Best Picture at the Academy Awards.

REALITY: I recently attended a Jewish film festival at my local independent theater. I went there thinking I'd see some touching films dealing with the reality of Jewish life. Something that would be accessible to outsiders, but still touch the heart of those followers of the faith. I sat down to watch a romantic comedy. Ten minutes into the film, I realized the problem: Like a WASP at a Carlos Mencia show, I was completely lost. I didn't get any of the Jewish in-jokes or references. Two people would be at a bar mitzvah and the rabbi would go "oiga boiga" and the theater would erupt in riotous laughter, knee-slapping, tears, coughing, and I would just be sitting there.

I bring this up because I have no idea what happened at the beginning of A Serious Man. Apparently, neither did many of the senior citizens in the theater with me, given that many of them went outside to angrily complain that they had been seated in the wrong movie. It opens with a five-minute scene set in God-knows-when, where a man and a woman invite into their home what may or may not be a "dybbuk." She decides to stab this "dybbuk" in the chest, and then we're taken a few hundred years forward to the 1970s for the rest of the film. It's never directly indicated what significance this had, but my best guess is that these people are relatives of the main character, Larry Gopnik, and their actions caused Gopnik's bloodline to be cursed by God for eternity (or something, I have no idea since I'm, as they say in this film, a "goy.")

Despite the numerous Jewish references that flew over my head and the fact that I had to look up many of them on Wikipedia before writing this review, the film was genuinely funny. It's not full of obvious laugh-out-loud jokes, but it delivers plenty of wincing humor, as we're witnesses to Larry and the Terrible, Horrible, No Good, Very Bad Life. Like Job in the famous "Book of," God decides to see how much awful shit he can throw into Larry's life. His kids don't respect him, a student decides to blackmail him, his wife wants to leave him, his neighbor probably wants to shoot him, and he can't get any straight answers from the three local rabbis on how or why this is happening to him. Larry reacts to these misadventures not with anger but instead with stunned incredulity.

Like Larry, I sat back with my jaw agape during both this film and the romantic comedy I mentioned at the beginning of this review. The difference was that I was actually laughing this time, even if I didn't really understand the side-splitting hilarity involving a "Get."