Once again this update was co-produced by none other than Rich "Lowtax" Kyanka, who took my jokes, made them funny, then added a few funny jokes of his own. Hats off to Lowtax, everyone! He needs them because he's going bald!

Starting a week from Tuesday I will be doing a new feature. It will be about sports and will have things like sports news and reviews of sport-themed videogames (i.e. Bill Lambier's Combat Basketball). I will also probably make fun of Rasheed Wallace's bald spot a lot! It's a wacky world! Right now we're leaning towards "Pregame Wrapup" as a name. I like it but I thought I'd see if any of you readers had a short, snappy suggestion for me. Please email me if you have any ideas! You might even get a form email back thanking you for your "compliment/contribution/death threat". 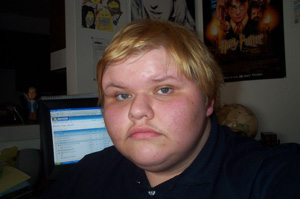 A lot of you have emailed asking for an update on my dog, Reggie, and his gay dog buddy, Shogo. They are doing fine now that they are living together the dick-biting has turned more into a romantic, gentle licking. They are also scared of the Robosapien and the Airzooka. Shogo enjoys nothing more than munching on a straw wrapper from a Capri Sun, and Reggie is content to bark at anything that comes within a five-mile radius in front of the house. This is, of course, until said thing comes onto our porch, in which case he belly-crawls around the living room and leaves a trail of pee wider and more jagged than the Mississippi. Maybe he's making a map! A map to hidden dog treasure! Like a turd under the bookshelf or something!

Where da moviez at

Last week we all had a hearty laugh at Hard Rock Zombies. Next week we're going to look at "Skeleton Man" or "American Vampire", and after that hopefully "Quiltface" if I can track down a copy.

See you all in a few weeks!