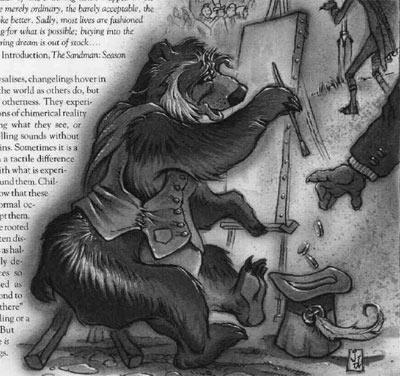 Steve: Whatever. Bear dudes are pretty much central to fairy tales. How many have bears walking around and living in houses and acting like people?

Zack: They might live in houses, but don't be fooled. They're wild animals. Beasts. And they will turn on you if they get the chance and crack open the walnut of your skull for the delicious meat inside.

Zack: And they'll raid a campground for a cooler or even your garbage, sure, but once he's done giving a giant-nosed portrait to somebody down in Perdido Street Station he's going to turn around and eat the face off a lone hiker.

Steve: He lives in dreams. Look at him. He's kindly and just loves to paint. Look at his little top hat.

Zack: That's how he lulls you into a false sense of security. Don't let your guard down, Steve. One lapse and Baloo here is going to turn your hands into camp site scat.

Steve: If you live your life all the time like you're gonna get eaten by a bear dude then I think that means the terrorists have already won.

Zack: The bear terrorists won back in 2008 with the election of their President, Beary Hussein Sotero.

Zack: You can send your hate mails for that joke to zackparsons@somethingawful.com.