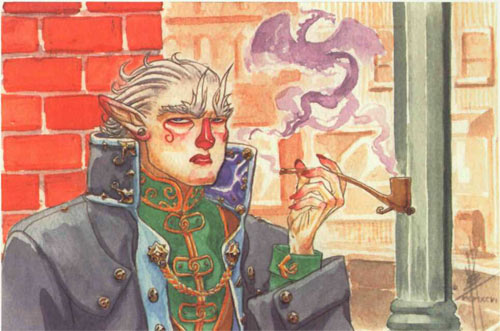 Steve: "As you enter the dream realm you see a very important elf. He seems unimpressed with you."

Zack: It takes a certain kind of fairy to pull off the double popped collar look, but this guy has the eyebrows to do it.

Steve: Admit it, dude, if you could blow purple smoke dragons and had owlbrows you'd be hanging out on street corners putting it out there for everybody to get a look at.

Zack: It's called Gandalfing. Sounds cool at first, but no matter how fresh your look you're always one toke of the pipe-weed away from fireworks and hobbit quests. Before you know it you're hauling your double collars all over a mountain doing fuck knows what with a bunch of hairy little fatties.

Steve: Sounds awesome to me.

Zack: Sounds like a Craig's List Casual Encounters ad gone horribly wrong. "All I wanted was a no-gay-stuff JO buddy to blast a mega load on my face while the wife was out of town and I ended up on a mountain fighting a dalbo."

Steve: I don't know what a dalbo is, but I think I'll take the fight on the mountain with one over the alternative.