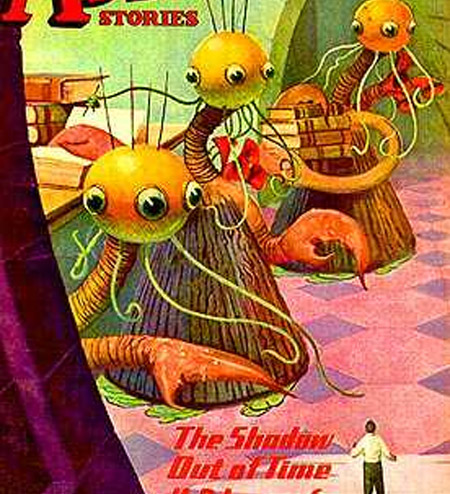 Steve: Okay, so these ghouls had some sort of weird gadget. That doesn't really seem like normal ghouls to me. Maybe they were working for someone.

Steve: Does Eazy-E know anything about the gadgets Courtney Love was talking about?

Zack: Eazy-E fires up a Phillie blunt and lets the mellowing effects transport his mind to a different place and time. After some careful consideration, he seems to recall that rare books exist known as the Pnakotic manuscripts, so rare that E has only heard of them, and these books detail the rise and fall of a species of time traveling creatures that once inhabited the earth and will someday inhabit it again. Supposedly these creatures traveled to human bodies and sometimes enlisted the help of humans. They used devices and psychic crystals to communicate through time with these agents. They were known as the Great Race of Yith.

Steve: Diabolical! So if these ghouls or humans or whatever were communicating with the Yith dudes, what does that have to do with Morton Downey?

Steve: Wait a second. You said they traveled to human bodies? Like they get tiny and climb inside the bodies or they inhabit them like possession?

Zack: Yes, Steve, they board a little submarine and fly through the body's tracts.

Steve: Oh, you're going to act like I said something ridiculous? Go back and read what you just wrote about Yith and time travel.

Zack: They swap minds with the human. So while they are in the human's body, the human is trapped in their body in the distant past.

Steve: Yeah that's totally normal compared to being shrunk down and going into somebody's blood or whatever. So Eazy-E knows all this?

Zack: No, he just knows what I said at first. He doesn't know anything about how the brain swapping works.

Steve: But if they can swap brains then maybe Morton Downey has swapped brains with them and that's why he went from talk show host to presidential contender.

Zack: I'm not saying anything other than Eazy-E and the rest don't know this is possible, so you can't go to the debate and accuse Morton Downey of being brain-swapped or something.

Steve: Not yet! Not without proof. Right now we're going to this Salton City place where those ghouls are based.