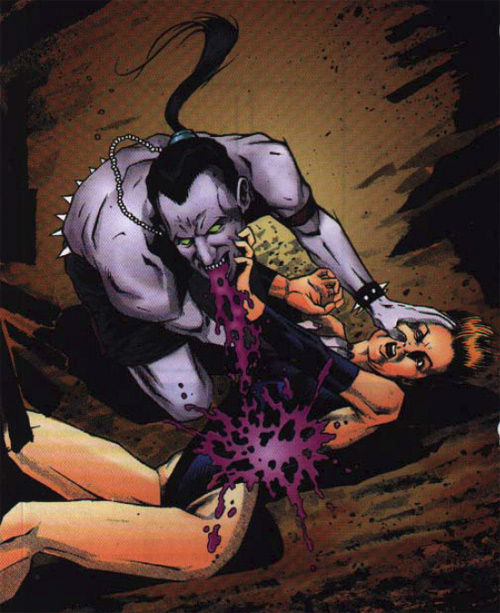 Zack: Admiral Thrawn here shouldn't have eaten the buffet at the Sweaty Clam.

Steve: This is pretty weird for Street Fighter. Later White Wolf books had all kinds of puking and stuff though.

Zack: Leave it to White Wolf to add gross sexual fetishes like vampires rape-vomiting acid on women in one-piece swimsuits to something perfectly wholesome like Street Fighter.

Steve: It even tells you that the acid will dissolve clothing. So, like, she's gonna be totally nude pretty much in a couple seconds.

Zack: That's when the roleplaying session gets fun. When the dude running the campaign gets to tell his male friend about how his female character is now writhing naked under the scalding upchuck of some greaseball purple vampire. Another awkward night around the table.

Steve: Admiral Thrawn wasn't a vampire, he was a chiss. And he could discern his enemy's motivations by their artwork.

Zack: I must be related because White Wolf is my enemy and from this artwork I can discern that I want to burn their offices down.