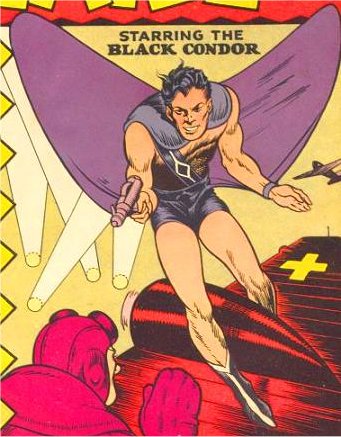 Dr. Thorpe: He's about as un-condor-like as you could possibly get. Look at him swarming around those spotlights. He's obviously a purple moth.

Zack: Are those spotlights? I thought someone was shooting pool and there was a bug on the table.

Dr. Thorpe: According to Black Condor's bio, he's a senator who was raised by condors in Mongolia, and he learned to fly by watching them. By watching condors, that is, not by watching other senators.

Zack: Ah, well that makes sense, that's exactly how I learned to fuse atoms. I just stared at the sun for a couple weeks.

Dr. Thorpe: I learned to photosynthesize by watching my lawn.

Zack: Somehow I don't think the real condors would be too happy with his bio. "We don't look anything like that. Do we? Do we?!"

Dr. Thorpe: I don't think condors use that much Nair. And even a condor has better taste than to wear shorts that short.

Zack: It also says in his bio that Black Condor crafted his wings from a pair of a giant woman's panties.

Dr. Thorpe: He appeared in something called "Crack Comics," which is a series based on the horrifying drug-dreams of its creators.

Dr. Thorpe: He's going to shoot him with his wrinkly-phallus-blaster. Cirque De Plano is saying "No, please spare my big meaty fused-together hand!"

Dr. Thorpe: "It belongs in a museum!"

Zack: Those leather shorts make me wonder if he has a sidekick. The Red Bottom? The Flying Twink? Oily Lad?

Dr. Thorpe: The Leaping Fairy? The Pink Bum? Or maybe he'd be more into The Leather Bear.

Zack: I like how he was raised by condors yet he becomes a US Senator. I wish the real senate worked like that. I would like to see Joe Biden suddenly try to take Tom DeLay's eyes out with his razor sharp talons.

Dr. Thorpe: Stock footage of the Capitol would probably always show a few senators flying around in casual circles above the dome.

Zack: I'm sure CSPAN would enjoy an incredible surge in market share, although that would probably level off when the Senate Parliamentarian includes a rule prohibiting senators from attaching razorblades to their dewclaws.