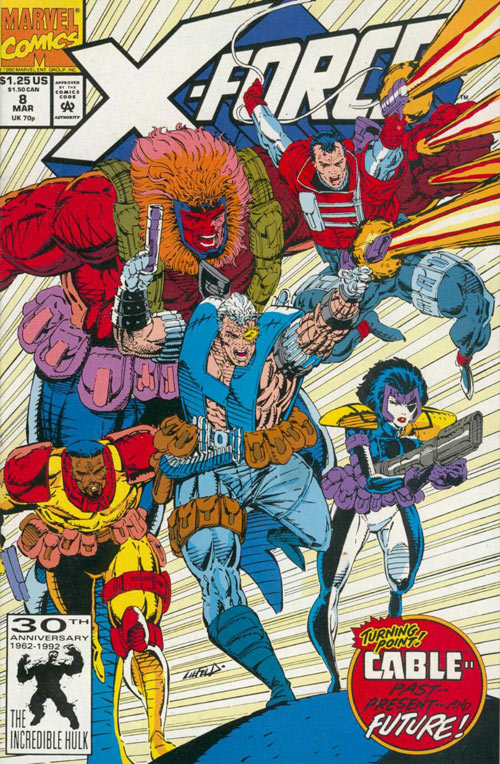 Dr. Thorpe: Okay, we were wrong earlier about that dude's pouches. He was nowhere near the upper limit on how many pouches a person could have.

Dr. Thorpe: I need a belt like that. I'd never be at a loss for paper clips, staples, marbles, jelly beans, loose change, guitar picks, bullets, spare buttons, ketchup packets, or thumb tacks ever again. Lord only knows what these creatures keep in there. They probably have enough pouchage to carry two chopped-up corpses each.

Zack: Maybe the giant guy with the giant pouches has a giant version of whatever is in everyone else's pouches. Like a bunch of those oversized pencils you see at restaurants with a school theme or maybe pieces of chewing gum ten times the size of normal chewing gum.

Dr. Thorpe: I wonder if the giant guy has feet the size of a normal person's feet. Everyone else has tiny little dainty feet.

Zack: The guy in the upper right has a leg that tapers down into a knife's edge of a foot. He looks like a fried chicken wing.

Dr. Thorpe: The guy in the middle has about fifty times the number of muscles required to operate his body. I wonder what all the extra ones control? Can he rotate his nipples or make his eyelids flip inside out or something?

Zack: So does the chicken wing guy. He has bulging muscles on his knee. His knee is the STRONGEST KNEE EVER. He can lift hundreds of pounds with that knee.

Zack: Oh man. I just had a thought that I bet The Aquarian would appreciate.

Dr. Thorpe: What's that? Is it going to blow my mind too much to continue?

Zack: Like man, seriously, what if all of their adventures are taking place in this one pouch as this world dude (dude the size of the world) is going to fight some other people and HE is just on a marble in another pouch.

Dr. Thorpe: My brain doesn't have enough extra muscles to comprehend that.

Zack: Forget this, I'm going to go have a long talk with Dr. Bong about it.

Dr. Thorpe: Check for stuff hanging off the doorknob before you go in. You know how that guy is with his weird signals. You don't want to walk in on something you don't want to see.