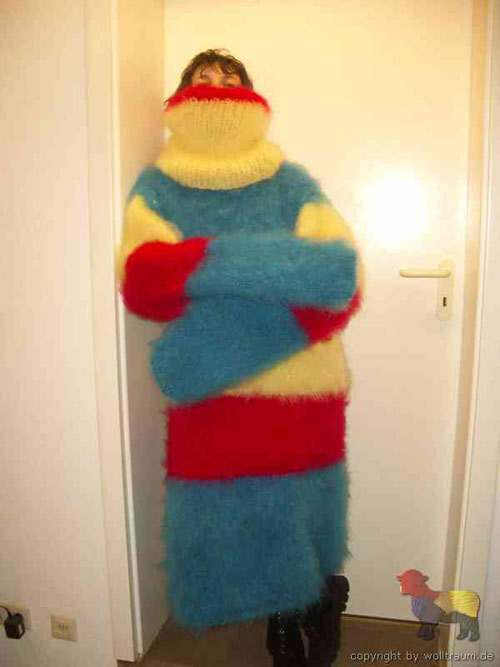 Dr. Thorpe: That door handle is showing up a little too often in all the wrong places. It's kind of like Value Ape. It's basically the insignia of something-fucked-up-is-going-on.

Dr. Thorpe: Yeah, I'm awarding myself 10 points on the Dennis Miller scale for that one.

Zack: To put that in gooncentric terms: it's the arrow in the FedEx logo. You will never un-see the door handle.

Zack: She looks like a parfait at the Heritage Foundation's July 4th fundraiser dinner.

Dr. Thorpe: Did she pull those boots off an extra in Freejack?

Zack: I don't know about that, but Tetragrammaton troopers shouldn't be selling their footwear to an obvious sense offender.

Zack: Not without incident anyway.

Dr. Thorpe: God, she's as sweaty and hairy as David Hodo after a long night at the Paradise Garage.

Zack: I'm half expecting her to start attacking Pepperland.

Dr. Thorpe: With that thing over her face, she looks like Robert Z'dar in Beastmaster 2.

Zack: I don't know about Beastmaster, but I could definitely see Trap Jaw here picking some fights with Beast Man.

Dr. Thorpe: She looks like Jeff Fahey in the final scene in Iron Maze.

Zack: She looks like one of the data pylons from Compustorm started offering haircuts.

Dr. Thorpe: She looks like Kitty Carlisle's hat at the 1934 Oscars.

Zack: Which one is the rock layer where they found the monolith in Howl of the Druid?

Dr. Thorpe: I'm getting flashbacks to Jerry Van Dyke in the fifth season finale of Coach.

Zack: Was that the one with the "Party Snake" or was that season four?

Dr. Thorpe: Heh. (I should point out that it takes a pretty deep understanding of Coach to get Zack's little double entendre there).

Zack: Nah, you're thinking of one of the b-sides from Zappa's Porcustrada.

Dr. Thorpe: She looks like Kent Tekulve celebrating after the 79 World Series.

Zack: Oh man, yes! It must have taken them 20 minutes to drag him out of that ditch. I can't believe the network stayed with the broadcast. It was like the world series broadcast just transitioned to the Baby Serpico rescue from '81.

Dr. Thorpe: And speaking of babies, doesn't her head popping out like that remind you of the infant Prometheus emerging from the falcon's egg?

Zack: Haha, good call, but I'm sad to say you're thinking of the chimera's egg.

Dr. Thorpe: Oh, are you one of those Hesiod fags? I prefer the Hyginus account. But then again, I don't like R.E.M.

Zack: Look, you follow the Janus school. You know it, I know it. Anyone who reads your blog knows it. I follow the Amemnoch school, and I think I have every major mythologist from Sperlmann to Urberlune to back me up. Stop being childish and accept that I have the facts straight and you don't.

Dr. Thorpe: Looks like someone woke up on the wrong side of his Petherotanaculus.

Zack: Stick your Ceolopathus right up your pretentious cunt, you hob. We are done with this shit.

Dr. Thorpe: Ha, I know how to push your buttons, just like Michael Nouri's wife in The Hidden.