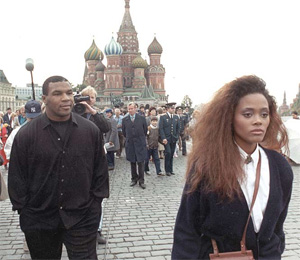 "I met Mr. Nintendo about my video game. He was very small and strange looking and the man with him had to translate what I was saying so I don't think he was very smart. He showed me some pictures on the TV of what I looked like in Punch Out. I said why didn't you give me the lion's mane and trident like I said? He said it was a realistic boxing simulation and I said can this little faggot here beat me in it? He said yes but it is very difficult and so I chased him off my property with a lawn mower. That was the end of the nonsense with the video games."

"I was in Moscow to fight Pinklon Thomas and I decided to go to the zoo. They had a beast there that reminded me of Grimace called a hippopotamus. I said to the zoo man how much for this to put it in my pool in Ohio. He can live in the pool and I'll throw him bushel baskets of apples. And the zoo man said sorry sir we cannot sell this to you it is a dangerous animal. I told him I am a dangerous animal. I crushed his hands into dust and kicked off his kneecaps and he started crying so I put a chair through his back. He was crawling around like Bishop from Aliens I said tell me where your daughters go to school so I can make them all pregnant but then the Army showed up with a helicopter."

"I became obsessed with the Teenage Mutant Ninja Turtles. I bought four turtles and a rat and put them in a cage together. They acted ridiculous. Like they didn't know each other. I kept feeding them pizzas and the rat got big and fat and the turtles didn't do anything. I said what's wrong Donatello. Then I remembered of course they needed April O'Neil. I put in a call to my friend Ray Pasco at Channel 5 Fox and asked if any of his reporters wanted to live in a cage with rats and a turtle for $85,000. Allison Acres the weekend anchor said she would do it but at the last minute I remembered the problem was the real turtles lived in a sewer so I flushed them all down the toilet and Allison Acres tried to go down into my toilet but she wouldn't even fit in the big one so I had to fire her."

"I went to a hospital for kids with cancer and I did not like it. There was a funny smell in the hospital. It made me nervous. A nurse came and found me in the room with the big scanner. She told me I couldn't smoke cocaine inside the hospital. I threw her out a plate glass window. Luckily it was only on the third floor so she was only in a coma for a while and didn't die. Later that hospital changed its policy to give me a room to smoke cocaine but I was done with cocaine by then and mostly into poems." 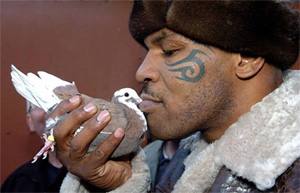 "Should I have bitten off all of Sigourney Weaver's fingers at that party? No, probably not, but I believe in asking forgiveness of God rather than asking permission of God. They reattached most of them except for the one I swallowed. But I am sorry for swallowing that one."

"My pigeons can be ridiculous. I am not afraid of them. Not afraid of most of them. There is one that I will not go near anymore, but that has to do with a ghost incident I don't want to go into."

"When I started out as a fighter I thought I had to kill someone in the ring to make a reputation for myself. But the only man I killed in the ring was Mike Tyson. I met him from negative world and his eyes were glowing black. He knew every move I knew and was just as strong. He was my toughest opponent. Next to alcohol and cocaine addiction."

"I can never apologize enough for how sorry I am for all the things I am accused of being framed for doing, but I didn't do them. It was a miscarriage of justice. And for that, I am truly sorry."