Arthur's Quest: Battle for the Kingdom

During this whole misadventure, you end up fighting some of the stupidest enemies since those limp-wristed “kyonshies” from Phantom Fighter. The lawn gnomes aren’t only in the early stages of the game, they show up in every single level, only each incarnation requires twice as many hits to kill as the last. And Valu-Soft, in keeping with their development mantra of “Yeah, why not, let’s throw in some of that”, added the ultimate sign of bad game design: spiders. Weak spiders in the beginning, then in later levels, different-colored spiders that take more hits to kill and can spit acid at you. They also threw in werewolves that run back and forth and shoot crossbows at you (as opposed to, say, jumping on you and biting your face off), and obnoxious evil fairies who fly around hitting you with axes bigger than they are.

Once you fight through about 20 million of these enemies you get to fight Morgan LeFay, and it takes about 10 seconds to run up to her and smack her with Excalibur a few times until she falls over. At that point it goes back to the village you saved in the beginning, with the various carbon copy people still standing around waiting for something interesting to happen. Then it shows two quick messages about how cool King Arthur is in a really small font and unceremoniously kicks you back to the menu. 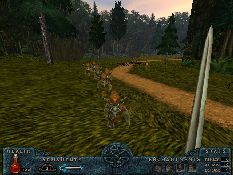 The enemies are all slower than you and there's no point in stopping to kill them, so your best bet is to just run through each level and ignore all the enemies. Arthur isn't a very good fighter but he's a hell of a long distance runner.I know you’re just dying to hear about what weapons you’ll get to use on these amazingly diverse enemies, aren’t you? Well, let’s see what they are!

Damage Equivalent: Getting whacked with a roll of paper towels.

Every first-person shooter has a piece of shit melee weapon in the “1” slot that never gets used. Usually this is just a backup weapon that’s there to punish you if you’re stupid or wasteful enough to run out of ammo for your pistol in the “2” slot, which is remarkably hard to do because there is always a box of 50 pistol bullets sitting around every single corner. However, this melee weapon is here to punish you simply for being stupid or wasteful enough to buy this game! During the first battle against the army of grunting lawn gnomes, the Plastic Sword is your only defense against the little pointy-hatted bastards. Fortunately after the first fight you receive the Toy Bow, which inflicts even less damage, misses just about every shot you take and has the added bonus of a limited supply of ammo! Whee!

After I fought off 200 little dwarflings and saved the industrious clone-people of Whateverthatvillagewascalled, they handed me an utterly useless bow before sending me off to go find Merlin. I assume after I left they spent a good half hour snickering and laughing at me before getting back to their busy schedule of standing motionless and watching mold grow on their feet. Ignore the previous paragraph where my naive, ignorant self from the past whined about how useless the Plastic Sword was – this fucking bow is so horrible at killing enemies that every shot I took made a few of the dead ones come back to life and rise from their graves like the guy from Altered Beast. At least with the Plastic Sword an enemy would die once you whacked it 20 or 30 times, but the Toy Bow is unable to kill any enemies because you can never hit them. You can have a giant 12-foot-tall hick standing in front of you at point blank range and shoot, and somehow you will still miss. And if that wasn’t bad enough, sometimes when you fire the arrow will fail to arc downwards and hit the ground. Instead it will arc upwards and disappear into the sky. Yes, that is correct: the people who made this game were unable to incorporate gravity, otherwise known as the “Principle of Things Falling Down Instead of Up, Durrrrrp”, into their game. If I was a programmer and I couldn’t even get gravity to work correctly, I’d quit and find something less embarrassing to do, like writing for a website or something.

Damage Equivalent: I have no clue! 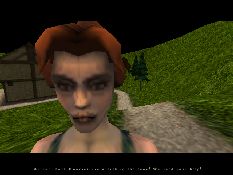 Most people don’t realize that this weapon is actually called the Phantom Mace, mainly because I just made it up. It possesses a unique ability that I have never seen before – the ability to not be in the game at all! You see, after winning the respect of the waddling mountain dwarves, some of the very few dwarves in this game who don’t try to chop your kneecaps off, they proudly offer you a mace. At first this looked like a welcome opportunity to upgrade my arsenal from “stuff that doesn’t hurt” to “stuff that hurts.” However, when I tried to hit 3 to equip it, it wouldn’t equip! Figuring there had to be some sort of mistake, I threw my hands up in the air and indignantly yelled “There HAS to be some sort of mistake!” When that didn’t work I typed in a cheat code to give me every weapon in the game with full ammo. But even after doing that, and even though “3” was bound to “Mace” in the control menu, the Phantom Mace simply refused to materialize. That leaves me free to speculate about what it really does, so I’ll just say that it’s made out of human teeth and its secondary fire lets it puke out bags full of live turkeys.

Damage Equivalent: Getting hit by two nuclear missiles at the same time from opposite directions.

Excalibur is yet another clever attempt to fool the players, since the developers were probably banking on the fact that anybody who voluntarily purchases this game is pretty easily fooled. I used a cheat code to get Excalibur early on, and I was very happy with the amount of ass I was able to kick. Instead of swiping an enemy 20 times with the Plastic Sword before it died, I could hit an enemy once and it would react as if I had dropped a grand piano on its head. Unfortunately, when I got to the part of the game where you’re supposed to get Excalibur, all the enemies suddenly got a whole lot tougher. It took just as long for me to kill the later enemies with Excalibur as it did for me to kill the early enemies with the shitty starting sword.

What more can I say? Out of all the games I have reviewed for SA, this is easily my least favorite. This game was not merely unfun, it was so thoroughly and profoundly unfun that it physically sucked all the fun out of my slim, sexy body and then pulled a Shang Tsung pose as if it had stolen my soul. Any computer with this sloppily coded mess of a game installed radiates a strong aura of anti-fun, an aura powerful enough to wither flowers, pop children's balloons and give clowns cancer. This almost became the first game I ever gave a –50, which would have made it the third perfect –50 game in SA’s history. It wasn’t quite bad enough to achieve that honor, but it was very, very close.