But don’t worry folks, Ms. Hawk is an experienced pilot! As soon as the warning light comes on, she performs a totally cool dodge by waiting until the missile gets really close and then performing a barrel roll by pointing the nose of the helicopter up until the thing stalls, fumbling the helicopter back upright as it starts to fall, and pretending she did it on purpose. Her sootheaded companion screams “Damn! Let’s get out of here!” apparently completely unprepared for the possibility of being shot at. But uh oh! The missile decides to swing back and come around for another pass! This time she can’t use any of her high-falootin’ helicopter barrel rolling, and the missile is shown getting closer and closer to the front of the helicopter and then inexplicably hitting them from behind. The helicopter is shown falling from the sky (apparently getting hit in the tail makes your main rotor abruptly stop spinning) and then the title pops up again to remind you that you are, in fact, playing “K. Hawk – Survival Instinct.” 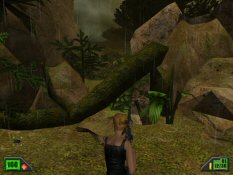 Uh oh, a log! Too bad there's no way to jump.You inexplicably end up standing unharmed on a beach, and thus begins your exciting adventure. According to some guy who likes to talk into your ear a lot, in order to be rescued you have to infiltrate the base you crashed near. It’s not anybody’s base in particular, just a base. Just as you’re about to go infiltrate the fuck out of it, disaster strikes in the form of three dopey guys walking down the beach for no reason. They follow the same pattern every enemy in the game follows – they start at point A, walk back and forth between point A and point B, and they keep this pattern up until physically unable to continue due to being filled with bullets. You can even see the cone of vision for every single enemy on your radar, and if you’re outside that cone you’re guaranteed not to be seen. However, if you’re dumb enough to let an enemy see you, he will unleash one of many terrifying quotes before he starts shooting.

“Fire at will!” (followed by turning around and running away) 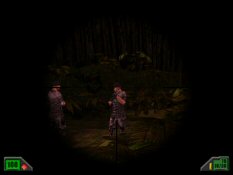 If you don’t die of sheer terror after this deadly verbal barrage, you’ll have to avoid the enemies’ gunfire, which would be a lot more challenging if they fired more than once every few minutes. If you happen to have a gun you can try firing back, which may or may not do anything. Sometimes you can kill an enemy with two shots, and sometimes you can hit a guy with ten shots from point blank range and he’ll still be standing there yelling and shooting off to the side. Also, enemies become temporary invincible when recoiling from being hit – you have to wait until the enemy is done reeling and stands up straight before you can hit him again. Enemies also don’t take hits while they’re reloading, but they aren’t really invincible. The damage just gets delayed until after they reload – they’ll calmly finish reloading and then suddenly scream and flop on the ground.

The sound isn’t too bad in the indoor levels, but most of the outdoor levels assault you with a cacophony of obnoxious ambient screeches. They didn’t bother to balance out the sound levels, so the occasional claps of thunder are barely audible and the ambient bird noises are way, way too loud. That makes the average K. Hawk experience sound something like this:

When you aren’t being bombarded by the noisy hummingbirds of doom, you’ll spend your time running around accomplishing objectives like “infiltrate this base” and “infiltrate this other base over here.” Sometimes you’ll have to look for colored keycards and sometimes you’ll have to search for wire cutters in a broken truck 20 feet away, but mostly you’ll be running around honing your abilities in the “crouch and walk past camera” and “shoot guy in face” areas.

I suppose it’s good that a budget game company has the ambition to try a project like this instead of making another generic FPS, but for Christ’s sake, you can’t have a good stealth-based game when all the enemies just behave like Koopa Troopas. Being able to shoot a guy in the head and have his buddy fail to notice is acceptable in a standard FPS, but not when you’re trying to create realistic infiltration gameplay. Same goes for enemies never responding to noise or to bullets flying past their heads. Also, if it were up to me you would need a license to release PC games, and anybody caught releasing a game where you have to collect colored keycards would be forced to eat his license and his pets.