Street Drag’s ass-kicking racing sequences are sure to make you feel like Vin Diesel, assuming he could fit his inflated head into one of these tiny little cars. You start out with the camera slowly rotating around the two cars, both of which are inexplicably hovering a few inches above the street. After the camera stops screwing around and gets into position, the countdown is blandly recited by a girl who unwisely stands in front of your cars to start the race while the section of street right below her feet magically emits colored light. In an extremely bored tone of voice, she drones “Car one….car two….ready….race.” and you will quickly discover that for some reason you can start a split second before she says “race.” Every single race is in a perfectly straight line, and I have no idea why they even bothered assigning controls to Left and Right since you never have to use them. All you have to do is hold the up arrow and occasionally tap a button to upshift. And until you get to the end you only have to upshift twice per race, since even the unupgraded car you start out with can hit 70 miles per hour in second gear. 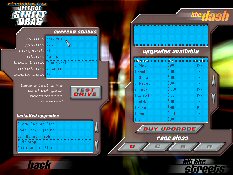 The "Installed Upgrades" window on the left serves as a checklist for everything I hate about street racers.There are four different courses you can race on, but since the game just isn’t up to speed on the whole modern “roads that curve” extravaganza, the only difference between the courses is that they take place in slightly different locations in the same town. In order to get to the coveted “A_Class” and race the dreaded Rocco you will have to work your way up through the ranks, which on the monotony scale ranks around the level of a hacked version of Diablo that forces you to play one room over and over, even though if Blizzard did that no one would be able to tell the difference. The only parts that improve your performance significantly are horrendously expensive, so when you have a Level 1 Turbocharger Kit that costs $1000 and you’re winning $40-$60 per race you’re going to end up racing the same opponents over and over and over and over just so you can save up the money to buy good upgrades and advance to the next class. Of course the behavior of “going forward” doesn’t leave room for any real AI, so the only difference between the opponents is that each one finishes with a progressively faster time, usually in .1-second increments. This wonderful 20-second cycle repeats until you defeat the mighty Rocco and are richly rewarded with this victory screen, which helpfully suggests that due to your unique ability to hold the W key for 20 seconds you should become a professional Midnight Outlaw Illegal Street Draggist.

My victory did not come without braving a few hazards, however. You have to be careful not to hit the other racer, or it will cost you $40 at first and $150 in the later races. If during a race you decide to hit the left and right arrows despite the fact that they serve no functional purpose whatsoever, you run the risk of hitting your opponent’s car, which instantly stops the race and forces you to pay $40/$150 for repairs. This seems like an unrealistically cheap repair cost until you realize that if two of these tiny Asian “tricked-out” cars got in a collision, the only significant damage would be to the 40 pounds of Type-R and Fox Racing stickers that coat the outside of the cars like rotting layers of dead skin. By ramming a ricer’s car you run the risk of upsetting him, in which case he will decisively respond by wringing his hands and saying “Oh man, my mom’s gonna KILL me!” 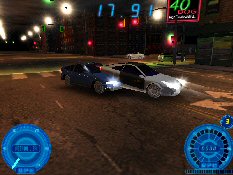 Hey, we managed to embed our cars halfway into each other! That'll be an embarrassing insurance report.

The graphics look like an early alpha build of a game engine that was written in two weeks for a high school Pascal project and then converted to run on the Nintendo 64. Every surface looks blocky and jagged (including the tires, which is the one area where that really should have been avoided) and their godawful attempt at reflection mapping makes it look like the back of your car is constantly vomiting out discolored, misshapen pixels so you can watch them ooze down the back window and accumulate around the license plate. And the art team apparently didn’t feel like modeling any actual people beyond the half-sedated race starter girl, so they made every single glass surface completely opaque. Cars frequently clip halfway through each other after races, the camera sometimes jumps around for no reason, red traffic lights appear at the bottom where the green should be, all the textures are blurry, and the NOS fire effect looks like the back of your car is equipped with an orange snow-cone launcher.

Fortunately for me and other gamers worldwide, this pathetic attempt to recruit more teenagers to the ricer cause was a complete failure. But sadly, as long as high school kids who are desperate for acceptance are willing to spend hundreds of their parents’ dollars on making their car look like a giant ugly Hot Wheels toy, this group’s numbers will continue to increase. I was originally thinking that we need some kind of counterbalance, something to lower the population of people who like to drive cheap cars as fast as they can down city streets in the middle of the night, but then I realized that’s why man invented the telephone pole.