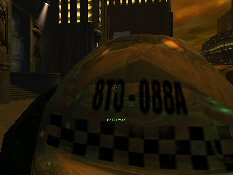 In the future, all hovercars are given a protective maple syrup coating.I wouldn’t worry much about the story, since you’ll never see the ending unless you can battle your way through Revolution’s horrible physics engine and the hordes of evil glitches just waiting to kill Jack in a number of creative and highly retarded ways. You can get stuck inside solid objects underwater and drown, you can clip right through the walls and fall out of the map, you can bounce off ladders like a rubber ball and fall, and in a couple places you can stand up at the wrong time and get your head stuck in the ceiling. Hell, sometimes jumping up and bumping your head on a regular doorjam will inexplicably kill you. And if you have the patience to battle your way through these “features” and beat the first few levels, you will encounter a different bug that trumps them all. More on that later.

If there was ever any doubt that this game was shamelessly modelled after Half-Life, which there wasn’t, this nonexistent doubt starts existing even less when you look at the weapons. There are a couple original ones, but most of them are based in some way or another on Half-Life’s weapons.

Crowbar: Yes, your default melee weapon is a crowbar. It even tries to look like the one from Half-Life, but it ends up looking more like a giant staple glued to a toothpick. They even copied the rapid-fire “left swing right swing left swing right swing” attack animation, although the muffled, distorted “hit” effect sounds like someone shoved a microphone up his ass and sat on a beer can.
Half-Life Points:

Electric Whip: The crowbar may have been disappointing because it doesn’t live up to the headcrab-slaying death machine that was Half-Life’s crowbar, but the Electric Whip is even more disappointing because it sounds like such a cool weapon and ends up being completely useless. Even though it looks like it hits several feet away, it has just about the same reach as the crowbar and does the same pathetic amount of damage. I was surprised to find this weapon in the game because there was no whip in Half-Life, and this shocking deviation from the source material earns the Electric Whip zero Half-Life points.
Half-Life Points:

Pistol: Much like the pistol in some other game you may have heard of, this rectangular pistol does a pretty low amount of damage but ends up being useful because you never run out of ammo for it. The difference is that this one shoots tiny red beams that can somehow light up a whole room, and shooting near an enemy without hitting him will sometimes make him back up and start running in circles. However, I had to take a point off because the secondary fire doesn’t fire faster and less accurately than the primary fire.
Half-Life Points:

Blue Sparkly Shit Gun: This thing looks and sounds a lot like Half-Life’s gluon gun, but instead of firing a stream of pure death, it fires blue sparkly crap that sticks to walls and floors and disappears instantly if it touches an enemy or the ceiling. The sparkles fail to do significant damage or even light up the surrounding area at all, but they look very pretty and could be used to distract the enemies while you quietly take out the electric whip and sneak-attack them 17 times for the kill.
Half-Life Points:

Rocket Launcher That Sucks: At first glance this appears to have all the makings of a good old standard-issue rocket launcher. However, once you try to fire it you will quickly learn why it is unique – multiple rocket hits to the face from other rocket launchers will typically kill someone. Not this one though! In addition, sometimes the rockets will simply disappear midflight, and for god knows what reason, if you fire the Rocket Launcher That Sucks within 20 feet of a hovercar, the rocket will instantly blow up in your face and deal you a whopping 12 damage.
Half-Life Points:

Rocket Launcher That Doesn’t Suck: As an apology for all the weak weapons you were forced to use earlier, Revolution offers you a second rocket launcher with a very important difference – it’s actually capable of killing things! It carries almost no ammo, but the rockets pack a punch this time, meaning the time-honored tradition of hopping around and aiming at the enemy’s feet is actually a viable tactic now. And you can even use it to rocketjump up onto ledges. Well, you can’t ENTIRELY land on the right ledge, but if you attempt a rocketjump with this weapon, there’s a pretty good chance that one of your juicy flying giblets will land where you wanted to go.
Half-Life Points:

Crossbow: You can use this hilariously out of place weapon if you’re tired of using rockets and explosives and you feel your weapon needs would be better suited by tiny little flying darts. But somehow these non-explosive darts can make enemy robots explode if you pop them enough times, so I guess it’s all good. The only possible reason this stupid weapon is in the game is that Half-Life had one, and that gives the Crossbow a perfect five points.
Half-Life Points:

Robot Drone Thing: The RDT, Revolution’s version of the snark, is a great way to make all the enemies forget you exist. Drop one of these things on the ground and it’ll stand up and start spitting bullets at nearby enemies while somehow remaining completely silent the entire time. The elite enemy soldiers will respond by freaking out and running around randomly like chickens with their heads cut off, and continue racing around randomly until the RDT is finished mowing them all down. Unfortunately these are the disposable kind, so you can’t pick it back up and take it with you.
Half-Life Points:

As if all this wasn’t bad enough, Revolution offers something Half Life can only dream of - the game is completely impossible to beat. About a third of the way through the game, there’s an entity error that keeps kicking you back to an earlier part of the game, making this level complely impossible to complete! Wow! Let’s see what Activision’s official website has to say on the subject.

Question: I can't get past the level Confluence Point - the elevator takes me back to an earlier level. How do I get past this point?

*Note: After the installation of the patch, saved games will no longer function correctly.

Awesome! So out of the box, the game is impossible to beat unless you use a cheat code to skip the level, which I did because I was informed about this bug ahead of time. But if you don’t know about it, you get to go through a third of the game to get to the Confluence Point level, then wander around forever trying to figure out how to advance. If you go to their website you can get a patch that addresses the problem, but this invalidates all your saves and you have to start all over! Not only are they releasing a broken, incomplete game and patching the rest in later, but they clearly didn’t even play through the game once just to see if there were any crippling bugs that needed to be fixed. If that isn't a shining example of fine budget software, I don't know what is.