In Tsunami 2265 you run around in a big robot that looks like the game designers modeled it after a Transformers toy and tried to make every edge as pointy as possible. Your goal is to kill everything else before your robot d-...well, according to the instructions it doesn’t die, it simply “falls to the ground and deactivates itself from too much damage.” This mode also showcases the sloppiest, glitchiest physics engine I have ever seen. Your robot can run forward and backward at a reasonably fast pace, but can’t sidestep any faster than two miles per hour. When you jump up, your robot doesn’t launch upward, slowly lose its upward momentum and then start falling back to the ground. It travels up at a constant speed until it gets about 20 feet high, at which point it instantly stops ascending and hovers for a second, then instantly starts falling at a constant speed until it hits the ground. 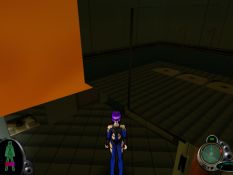 There are a few levels where you fight on foot, and they're exactly the same as the robot missions, right down to the glitchtastic graphics.Luckily for the player, the Tsunami 2265 developers decided to compensate for any difficulty caused by their horrible physics engine by creating enemies with the combined intelligence of a jar of applesauce. If you hit an enemy from long range he will sidestep, but he won’t return fire or even check to see where he’s being hit from. He will simply step to the left or right and stand there feeling very proud of his combat prowess. Of course, this means you can hit him again by simply shifting your aim to the side and firing another shot, which will cause him to step back to his original position and continue standing there motionless.

I thought that by itself would be bad enough, but “Got Game” apparently didn’t think so, so they decided to make the graphics in this game even glitchier than the physics. The art team here decided to rebel against the commonly held belief that an object should stay textured the same way from frame to frame, so enemies will randomly lose textures and show up as plain white for a few seconds. Sometimes enemies will also show up through walls for a few frames, where you can see them making a constant running motion against the wall in your direction, apparently unaware that they can’t run through solid objects. 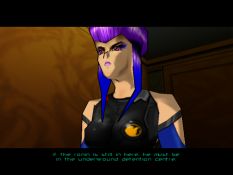 Sure, yeah, detention center, got it. By the way, there's a purple shower cap with tentacles trying to eat your head.

In order to incorporate the epic storyline into the game, Tsunami 2265 is interspersed with some really intense white-knuckled cutscenes. For example, this cutscene plays about ten seconds into the first level, when you go to rescue Neon (yes, they named him Neon) from the clutches of whatever enemy you happen to be fighting.

Bad Guy In Tank: “Halt! You have no authorisation [sic] to go through this territory!”
(camera zooms in on the barrel of your robot’s gun and the screen flashes a couple times, although nothing comes out of the gun)
Bad Guy In Tank: “Arrrrrrg!”
(camera shows the bad guy’s tank sitting there motionless after he yells, then it suddenly lurches back and falls over. Then an animated explosion sprite appears in the empty space where his tank was a second ago)

This game also contains the most bizarre bug I have seen in any game to date. See, in Tsunami 2265 you take damage for falling too far, just like in most action games. However, this particular fall-damage system has an interesting twist. While I was busy shooting my way through the horde of jerks that wanted to break my giant Transformer toy, I happened to walk right up into a wall and then jump straight up. When I landed, my robot instantly lost all its health and died. I’m not kidding. After continuing (you can’t save or load games mid-mission, you simply have a certain number of continues) I tried it a few more times in different spots and got the same result. No matter where you are, if you walk up to a wall and jump straight up, upon landing your robot will be instantly killed. Someday I’m going to find the person responsible for this bug and beat an apology out of him with a meat tenderizer.

I am not simply going to uninstall this game once I upload this review, I’m going to open up the Tsunami 2265 folder and manually delete each file one by one so I can hear them shriek in horror as each one is dragged screaming into the void of the Recycle Bin. But just now, in order to see if this game could pass the ultimate test of horrible-gamehood, I bravely trudged through the ad-infested shithole known as IGN to see what rating they gave Tsunami 2265. And yes, it did pass the test, since even IGN only gave it a 3 out of 10. These are the same guys that gave Unreal 2 a good review. A tip for Prograph: spending money paying your programmers and art designers is going to be a waste. You’ll get much better software sales if you take Infogrames’ approach and use that money to purchase advertising space on IGN so they’ll boost your game’s rating by a few points.