The War in Heaven

To help vanquish these unholy foes, you are provided with a veritable arsenal of ambiguous weapons. You will more than likely end up using your default sword the entire game, because most all of the other weapons are so incredibly lame that you'll be too busy laughing your ass off to hit the "attack" key. Don't believe me? Okay, let me present this screenshot to you then: 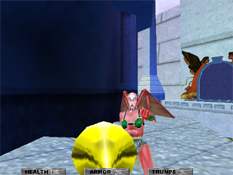 Yes, it's a horn. A HORN. I think this is the BFG of Heaven, because it pretty much kills whatever you aim at. Every time you pick up another horn, you get 10 more "trumps", which I assume is short for "trumpet", only the game designers obviously thought "trumpet" was too idiotic of a name to use for a weapon that's supposed to kill the forces of evil. It worked, because when I was charging through the medieval stone bathroom map with my "trump" in hand, I felt like a pixellated Rambo. Well, assuming Rambo had a penchant for brass instruments, which I think is a pretty safe bet. You can also equip yourself with a spear, which is like the sword, only somewhat slower. Then there's the sling, a weapon so pathetically ineffective that you can't hit any creature more than eight feet away from you. The Daemon has equally stupid weapons, from his evil Backscratcher of Doom to the "Fork" (which is the name it's actually given in the instruction manual). It doesn't matter which weapon you choose, as long as you're competent enough to hold down the "attack" key for extended periods of time, you'll probably be able to ace this game. The "weapon placement" in this title consists of putting weapons at the end of really long hallways. If you see a very long hallway, you should go down it, because chances are very high that there's a weapon at the end. PRAISE THE LORD! 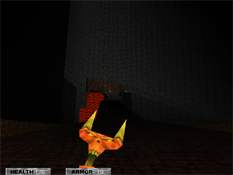 The "3D engine", which is an engine in the same sense of the word as "Battlefield Earth" is a "cinematic masterpiece", struggles like The Little Engine That Could to pump out the six or seven polygons that litter the screen at each turn. While the enemies are somewhat well defined (if we're comparing them to the complexity of characters from "King's Quest 1"), the maps look like somebody used the Build engine to vomit up a series of randomly sized rectangles. It's like playing inside a city in Everquest after the map author went on a polygon-reducing spree and threw over 80% of them into the trash. Despite the maps' lack of complexity, they still manage to choke the life out of an 800-MHz system, causing severe lag and framerate drops every time the player turns a corner. Don't even think about opening doors, because they invariably lead to new and more painful areas of the map. No wait, I finished that sentence wrong, let me try again. Don't even think about opening doors, because you'll experience a five second pause in the game from the point you get near the door to the point when it actually opens. I originally thought that this was used to create suspense in the game ala "Resident Evil: Code Veronica", but then I remembered that it was just because the game programmers spent 17 minutes coding the engine.

Speaking of maps, these are the absolute best examples of mapping failure that you'll ever see. We're talking "Cranky Steve Nervous Breakdown" material here, folks. Parts of maps aren't textured. Polygons appear and disappear at will. Textures change colors depending on how close you move to them. You can see through doors and walls occasionally. Sections of map disappear. Those are just the structural problems... seeing the maps themself will make you shiver in fear. If I'm supposed to believe what the game authors are preaching, Hell is actually some kind of disco palace with a gigantic racecar and enough red to piss off ever single bull in existence. Heaven is a sports coliseum with a series of interlocking drainage pipes that link sections of hollow concrete blocks together. TESTIFY!

Then there's the gameplay speed, which makes movement feel like you're controlling a 1968 Sears freezer unit through a field of 6-foot deep snow while a fat man rides on your back and vomits down your shirt every step. Or I could mention the sound, which seems to have been entirely recorded in the basement of one of the programmer's parent's house. I won't go into details regarding either of these, because I really want to wrap up this review and get back to doing something more productive. Hey, those toilets don't clean themselves.

I've spent countless hours playing this mess of a game, and I can honestly say that I don't really feel any different, much less closer to God. I still think that salvation is as far away from me as it ever was. The corroded gates of Hell continue to beckon me towards them, a punishment for the time when I was young and made the retarded kid down the street eat sand until his mom came charging at me with a garden rake. The only thing I learned about the Bible and Christianity from this game was that they believe everything can be defeated by hitting it repeatedly with a sword (which I knew before). As it says in the instruction manual, "God game every individual the gift of free will." I'd advise exercising this option and fleeing if you ever see a copy of "The War In Heaven" within a five-mile radius of you.