Still, while the Black Kids demonstrated ample suckitude, it only took a brief listen to 3Oh!3's Want to put their shortcomings in proper perspective, kind of like how a leg amputation can distract from a nagging headache. Actually, it really only took looking at 3Oh!3's stupid fucking name, which incorporates all major warning signs: a) number b) punctuation c) retarded attempt at humor. I've faithfully recreated this unsightly scramble just to establish it exists: From now on, I'll use non-idiot transcription. Anyway, not only does 303 make Black Kids look better, it also enhances one's appreciation of black people as a whole. For example, very seldom do African-American musicians waste entire albums on the self-congratulatory mockery of another race's art form. 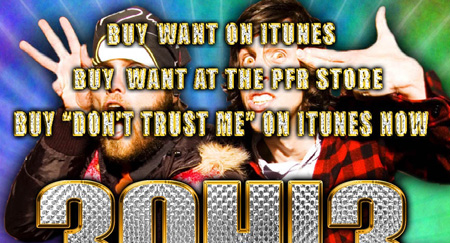 303's gimmickry involves appropriating club rap's crunk beats, macho boasts and rampant misogyny, with the punchline being "hey, it's white guys from Colorado saying shit like 'don't trust a ho.' Wacky! Or should I say, wizzacky!" Even if it were done well and had been released in 2002, back when people still gave a fuck about crunk, Want would've had a short shelf life, like all parody albums. Instead, it comes with an instantaneous expiration date, its relevance evaporating upon impact while the music photosynthesizes into noxious gas. 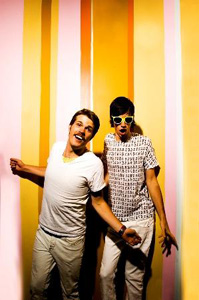 Junior Senior just ain't what it used to be.During "Don't Trust Me," one of these drips says "tell your boyfriend, if he says he's got beef/that I'm a vegetarian and I'm not fucking scared of him." That line does more damage to the vegetarian cause than all PETA's animal-killing antics, because even self-righteous meat virgins would probably find a rare steak more appetizing than the admission that they have something in common with 303. Later in the song, 303 uncorks "Do the Helen Keller and talk with your hips," a refrain that makes all those schoolyard Keller jokes seem like rapier wit. I'd love to see 303 do the Helen Keller, thereby rendering itself deaf-mute and 40 years dead.

"Don't Trust Me" fits into the current loathsome dance-punk phase, with its big dumb electro-drum pulse and wussily crooned chorus, but most of Want sounds more like Crunk Goes Punk, a torture experiment that assigned Warped Tour dunces to scrape the bottom of rap's barrel. Beatwise, 303 sounds like Lil Jon, but with the unintentional humor replaced by obvious, unsuccessful jokes. "You know I rep this shit," they blab over programmed thumps and whistles. "I'm a hit you from the back and make you holler 'til you pass out!" The group takes a break from all the hilarious minstrelry during "Still Around," an unremarkable power ballad that seems disproportionately palatable due to its sole redeeming virtue: It doesn't sound anything like 303.