What should I not bring with me? 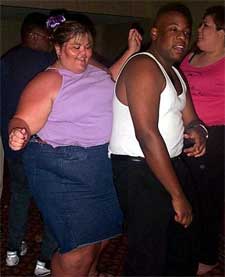 THIS TRAIN IS HEADED FOR THE BUFFET STATIONYour pregnant wife. They may try to trick you by saying they "feel fine" and "want to go," but you must stand strong and brush aside such blatant lies. Upon arriving in Orlando, the pregnant woman will immediately swell up with an extra 10 pounds of water weight absorbed directly through the air. Another 10 pounds will be piled on the first night thanks to a Disney-approved diet of hot dogs, funnel cakes, and unidentified deep fried test tube objects. Combine this with the fact Disney World is essentially a complex labyrinth of people waiting in line to wait in line somewhere else, and you've got yourself a creature capable of manifesting its raw crankiness as a cartoon sledgehammer bashing directly into your skull.

One option to help a pregnant woman alleviate some discomfort is to shove her around in a wheelchair until you either reach your destination or she gives birth, in which case you'll probably have to get another wheelchair for the baby since it will be too retarded to walk. While such an idea works in theory, this action proves nearly impossible at Disney World, because I guaran-goddamn-tee the day you leave for your vacation, every single fat person and crippled abomination throughout the world will spontaneously decide they want to go to Disney World THAT EXACT MOMENT. I just deep fried and ate an entire barn! Let's celebrate by going to Disney World and fatting the shit out of the joint! Henry, you better done fetch me a rolly-chair for each ankle, else the youngun's might mistake my dragging, saggy varicose veins fer garden hose again!

Your children. Sure this entire trip may be for them, but after witnessing what horrible spoiled creatures they transform into the moment of encountering Disturbing Alcoholic in a Little Einstein's Costume, you might as well rename them "Katelynn," purchase several Hummer-themed cellphones, and dress her up in those $100 designer sweatpants that feature fake rhinestones spelling out the phrase "DADDY'S BIGGEST SLUT." 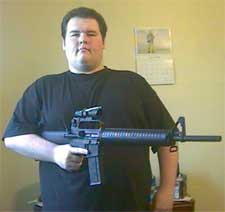 No guns allowed in Disney World!!!Children under five understand finances at the same level of adult cats. You can buy them the most expensive toy in the world, and they'll grow bored of it within seconds, discarding it for a filthy, AIDS-infected Wendy's straw they discovered and bonded with behind the Target checkout. Yet parents never give up, convinced the perfect joy-inspiring gift is only a few credit card charges away. This explains why the cat and children toy industries are so lucrative, able to charge $20 for wads of cheap Chinese plastic. It also explains why so many people hate cats and children.

When our daughter failed to emit a sufficient amount of "oohs" and "aahs" by the second day of our Disney adventure, I realized she was expressing the same amount of interest as driving her to the local Costco and letting her go hog wild in the new tires aisle. This is a child who grows truly excited upon unearthing a sticky wad of snot salad from her nostril. Her face lights up when substituting the word "butts" for any other word in the English language. I could've elicited a better reaction by locking her in a room with a tissue and CD of farting sound effects.

Additionally, reality simply sucks compared to cartoons. Animation is filled with magic, vibrant colors, and unbelievable settings. Reality is a cranky smoker with credit card bills sweating inside a steaming Donald Duck suit that smells like potato corpses. Each and every time Lauren encountered a real-life counterpart of her favorite Disney characters, she averted her eyes and refused to acknowledge their presence in any way whatsoever.

Now I can understand this behavior towards Prince Charming, because let's face it: Prince Charming is lame as all hell. Children ceased admiring the ultra-whitebread, boring face of classic Disney princes about a decade ago, when the national media informed them they should instead be attracted to rappers inside gigantic cars. However, she also gave the cold shoulder to Snow White, Sleeping Beauty, Cinderella, the Little Mermaid, and every single other character she talks about 90% of every day. Perhaps princesses don't seem as enchanting when they're trying to charge you $5.00 for a photograph.

Upon arriving in Orlando, how do I travel throughout Disney World area? 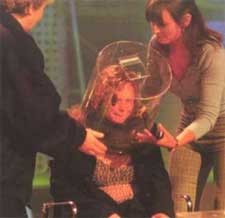 DISNEY WORLD!!!The simplest method involves subjecting yourself to the Disney Public Transportation System, a fleet of lumbering buses which arrive and depart at seemingly random intervals dependent upon your blood pressure and the phase of the moon. Rental car companies encourage you to rent a car, but that's only because they're evil and want you to die while they're in control of your billing information. Dead men don't dispute credit card changes.

Navigating to and from the Disney World area is like trying to clearly explain your "totally perfect form of society" after smoking a lunchbox full of weed. If you somehow successfully determine a way to travel from point A to point B without encountering five days worth of skeletons in stalled traffic, you'll still have to deal with countless toll roads, randomly placed street lights which only turn green if Mickey Mouse is passing through, and lost tourists vehicles spilling out from wormholes in the sky. It's essentially a real life version of City Connection for the NES.

Okay, I finally made it to Disney World! Now, what should I do first?