Tuesday, Jul 05, 2005 by Seth "Terrorsaurus" Knisley
Relationship Dynamics and the Art of the Meltdown

What can you cry about? What can't you cry about, you miserable fucking whore? At any given moment, you should be able to shed tears over the dissolution of at least two of your doomed interpersonal relationships. With a couple months of practice, you'll be able to combine the two for meltdowns that will permanently scar people you've never met before. Here's an example of the sort of thing you should be clucking out in between body-racking sobs and backhanded apologies: "Jesus fucking Christ Brad, I gave him head once! I told you I was sorry, why are you acting like this?"

This probably isn't going to win him back if he has a shred of self-respect, so start crying harder. Swear to stay on the straight and narrow. Beg for forgiveness. Promise to perform unspeakably disgusting sexual acts for him. Inevitably, your pleas will fall on deaf ears, and you will be left with one option: Moving on to the next host like the sentient colony of parasites you are. The next poor sap will be blissfully unaware of your total lack of commitment, willpower, and a moral compass. At least, he will be for a couple of months, which is about how long it should take for your attempts at monogamy to blow up on the launchpad for the exact same reasons. College cutie, will you ever learn? Hahaha! I doubt it.

When your unmitigable horniness and sickening lack of self-control start yet another hopeful young man down the path to misogyny, you will need support. Call up every girlfriend and eunuch who is still willing to feign sympathy and complain to them that all men are the same. Grasp at straws. Make it his fault. If you must, regale them with wholesale fabrications about how he hit you and cheated on you. Whatever you do, avoid acknowledging the fact that you are a weak failure, and complain about how hard it is to find a decent guy.

Life After College: The Downhill Slide 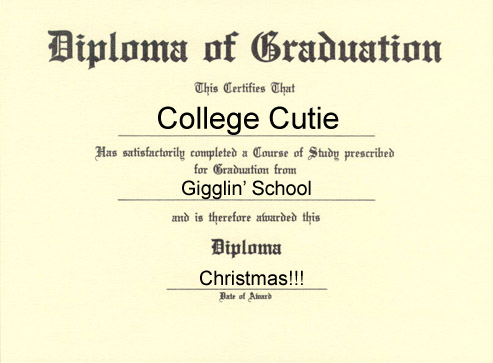 Congratulations, you survived college, and received a degree or were blacklisted academically for cheating or sleeping with someone for a grade. Your parents are proud, you're proud, heck, even I'm proud. So what happens now?

At this point, you're probably somewhere in your early to mid-20s. Go out there and live it up, girl! You're only young once, and as anyone worth listening to will tell you, the purpose of youth is to behave like a promiscuous and self-destructive party girl. The future is a long way off, so continue speeding towards the ominous brick wall that looms enormous on the horizon. Come back when you're done with that.

You are now in your late 20s or early 30s. Wow that was quite a ride wasn't it? Hey, what's wrong with your skin? It looks like the weekly benders have teamed up with the alphabet of Hepatitis you've contracted along the way to harden the skin on every part of your body into a copper-colored pleather nightmare. Herpes Simplex is annexing ever-larger parcels of skin around your lips and colonizing them with its telltale sores. The lips of your once attractive vagina are beginning to grow flaccid and dangle from your crotch like the weatherbeaten frills of a neglected leather jacket. It's looking more like the backroom of a taxidermist shop down there every day. This can't be happening. Not to you.

At the same time this is going on, you will notice your luck beginning to run out. Cops are writing you tickets instead of warnings. You no longer receive generous raises and promotions at work for no reason. You've even started paying for your own drinks. The first thing you should do is deny that it's happening. Call it a dry spell, or a fluke.

After you get tired of that, you'll want to enter a string of abusive relationships before eventually marrying an alcoholic who steals from you. You won't love him at all, but you also won't be sure if you can do any better. After he's done sucking the light out of your eyes, you will be ready to start your new job as a third shift waitress at a Denny's in a miserable city. Detroit would be perfect, and so would the entire state of Ohio.

As you drive by college bars on your way to work, and observe the hedonism which for so many years was the sole source of your waning self-worth, you should become bitter and despondent. Every day, you will become increasingly unwilling to cope with the waking nightmare your life has become. You will slide further down into the slavering maw of karmic retribution. You will fight less every day.

You will commit suicide before your 50th birthday. You are a college cutie.