Tuesday, Jul 05, 2005 by Seth "Terrorsaurus" Knisley
Tools of the Trade: The Cell Phone 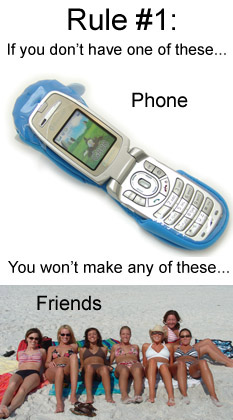 To truly succeed in college, you really need only one thing. In scientific journals (essentially a coloring book with numbers), cell phones are described as portable communication devices, often with additional functionality (internet access, text messaging, camera) built in. Would you ever date a scientist? Neither would I. They're so gay. You can think of a cell phone as a box with all your friends in it that gets stapled to your face as soon as you become stupid enough and destroys any vestige of self-awareness you may have had.

The cardinal rule of cell phone etiquette is don't ever stop talking. Of course this isn't always possible. Although your W-2 form may have you listed as a revolting slut, you're also technically a student. As such, you are expected to keep up appearances by attending class and occasionally bothering to cheat off the smart fat kid who freezes like a spooked cat every time you bat your eyes at him.

Most of your professors will be self-important windbags who talk for hours at a time. Likely, it is the only thing the two of you will have in common, so make sure to turn up your J-Kwon ringtone as loud as possible. You need to be able to hear your phone over the instructor, and your classmates need to hear a grainy, muffled snippet of J-Kwon's latest footstomping party anthem. You're doing everyone a favor here.

Some instructors will expect you to silence your ringer when you enter their classroom, especially during tests. They won't even let you stand up in the middle of a lecture and leave the room to find out how Christine's abortion went. This is why you need to carry a large purse and cram it to the brim with small objects, leaving your phone conveniently at the bottom.

The obvious answer is "anywhere and everywhere", but it's not quite that simple. You can't truly consider yourself a college cutie unless you're working your ass off to earn the attention, ire, and disgust of as many strangers as possible. Translation: The more public, the better. Anywhere around campus with heavy foot traffic is good, but restaurants are ideal. And remember, your parents are rich so eat somewhere classy. Ruining ambience and spoiling the mood is the name of the game. You want to stick out like a chainsaw in a day care. Churches will also work.

What to Talk About 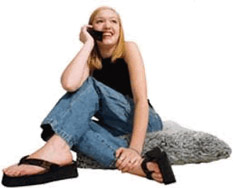 "He stuck his what? In your And he didn't even ask? Oh God I bet it's totally messed up. How much will it cost to fix? I didn't even know you could fit a cassette into a CD player."

Wait a second, you have absolutely nothing worthwhile to say but you're expected to chatter away your every waking moment anyway? How does that work? Relax, it's not as hard as it seems. A few weeks into your first semester, you'll have dozens of male suitors who pass you around like a titty magazine at summer camp. With all the depravity and melodrama that will envelope you, you'll never be at a loss for a good story about cum. Just in case you're struggling to get the ball rolling for those first few weeks, here are a few canned lines to help you along the way:

"Do you want to come with me to Bed, Bath & Beyond this weekend? I need a new set of sheets because I had sex with this gas station attendant named Jerry and I'm on my period… I know, gross, but he had really nice arms… Yeah, really heavy flow. It looks like a Mayan altar."

"He had the most amazing cock ever. It was perfectly curved to hit my G-spot with every thrust"

If none of those things has happened to you- which, let's be honest, is pretty unlikely- go out and make them happen!

Did you know that there are other ways to make strangers uncomfortable that don't involve excessively graphic accounts of the things that men you've known for three hours have done to your vagina (and sometimes to your anus)? It's true! Crying publicly is another way to bring every conversation in the room to a lurching, awkward halt. In many respects, it's even better than the gross-out method. Although both are equally effective at sucking the air out of a room, people tend to give the evil eye to you when you're laughing hysterically about the fact that your girlfriend Janine got Chlamydia from that ugly surfer she met in the clinic when she was picking up her birth control. When you're unselfconsciously squealing and crying, people are forced to pretend you're not there. Some of them may even feel sorry for you. Imagine that! Let's take a closer look at how to accomplish this.