The Democrat's Guide to Overthrowing the Government

Thursday, Nov 11, 2004 by Zack "Geist Editor" Parsons (@sexyfacts4u)
The 2004 presidential election is over and much to the dismay of most Democrats George W. Bush has been reelected to a second term as president. Just because the Republicans control the White House, the Senate, the House of Representatives, and will soon control the Supreme Court is no reason to despair. Now more than ever Democrats need to band together and exert their, uh, Fifth Amendment rights to overthrow the Federal government. Unfortunately, decades of whining and peaceful protesting have atrophied the liberal ability to form a violent junta to force the sitting government into exile. It will be a difficult road, but I am here to provide the Democratic Party with the most powerful weapon of all: my bad ideas. 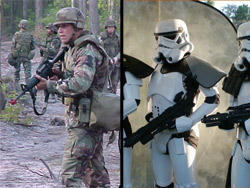 Being a Democrat fucking sucks. You know it, I know it, but what are we going to do about it? Obviously The System doesn't work, which means the only option left remaining is to move to Canada and live on a commune. Or is it? I seem to remember something happening way back in our nation's history, it was like this war where American fought American and our nation was rent asunder by great divides. That's right! It was the Civil War, and if the South is to be believed - and religious TV allows us to know that the South is always to be believed - then the South actually won the Civil War, proving once and for all that civil war works.

Civil war, hot brother against brother action, Atlanta burning to the ground, these things all sound great in theory, but we Democrats have to face facts. We are fucking pussies. Sure, we can get angry just as well as anyone else, but when it comes to actually pitching a fight we tend to either get our asses kicked or flee. Look at Kent State. There were what, like 30 National Guardsmen and like 5,000 college students? They opened fire and all the college students immediately ran away. I think like six people died, although I can't remember for sure because as we all know the winners write the history books. Six killed out of 5,000! Even armed with improvised weapons we could have overrun the National Guardsmen and hacked them apart, raising their hot seeping flesh above our heads in triumph over tyranny. Two to three hundred dead, tops.

It's time to reverse this trend of liberal spinelessness! We need to gear up for the coming Future War that will break this nation apart along cultural and philosophical lines. We need to plan our attack and get ready to bring the Republican tyrants to their knees!

Step One: Toughen Up 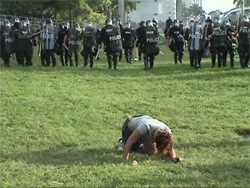 Your usual riot; the only liberal not headed for the hills is immobilized by pepper spray and about to get beaten into a paste.

Have you ever watched a liberal-fueled riot unfold on TV? The liberals gather with their makeshift signs, mill around for a while, then some guy throws a rock or something at the police line and all hell breaks loose. Usually this hell lasts for about 5-10 minutes and involves lots of liberals crying from tear gas, people running in terror, and police beating the ever-living Christ out of some teenagers wearing Rage Against the Machine hoodies available for $39.95 at Hot Topic. That's not a fight, it's a massacre, and if we want to have any chance at pulling this Civil War thing off we have to learn how to seriously riot.

Coming prepared is great. Feel free to bring a gas mask and some "Free Mumia" signs or whatever. However, the minute your jaw gets split by a collapsible baton don't expect your gas mask to filter out blood or your Free Mumia sign to get your ass out of the back of the paddy wagon. That's why you need to prepare physically and mentally for rioting. Start by purchasing a heavy wood or composite baton and repeatedly hitting yourself in the arms, shoulders, face, and head. It will take weeks to really toughen up, but if you can manage to endure this without getting punch drunk you will accustom yourself to tolerating pain and ready your body to stave off the shock that comes with a broken clavicle.

Once you've pulled that off you need to start working your way through a laundry list of chemical irritants. Begin by massaging oleoresin capsicum into your eyes and work your way up to various chlorine based burn agents that could theoretically be deployed if things got really out of control. New sonic riot control weapons mean that you should also prepare for the eventuality that the police you will be facing down might have future beams. Go to heavy metal concerts and handcuff yourself to the stage speakers. If the integuments surrounding your internal organs don't violently separate and rupture then you'll be hardened to the damage of a sonic weapon. Lastly, buy a dog. A mean, dumb, and hungry dog. Coat your legs in blood and let it loose. Practicing techniques for not getting your Achilles tendon shredded or your fingers bitten off. Try choking the dog unconscious or blinding it with your fingers. PETA may disagree, but when was the last time you saw a naked woman in cat paint standing in front of a line of tanks? It's been since at least '94. 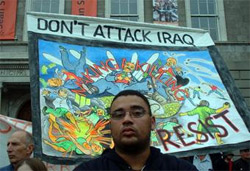 Great, Don't Attack Iraq, but then you've got this incoherently busy mural with people shooting flowers and rainbows out of their tits and no one knows what the hell you actually want.

One of the biggest weaknesses of liberal protests and demonstrations is that they inevitably come with a bewildering array of conflicting messages. Save the Dolphins! Bring Back Disco! Free Cola With Every Purchase! It's rare that anyone can look at a demonstration and really know why all of the people are there. Before you begin demonstrating get a few people you trust to go around and review all of the posters and signs being used. If necessary, make demonstrators sign loyalty oaths before the event begins. Please make sure that all women understand taking their tops off is counter productive to the serious atmosphere of a demonstration. Turn off your cell phones, since chatting on the phone constantly is not a good way of demonstrating that you really believe in Ape Amnesty or whatever it is you're protesting.

Lastly, ask the gays to tone it down a little. We appreciate their support in the coming Civil War and look forward to the HIV suicide squads, but if they're going to come to the protest naked or dressed up as a gladiator with a giant plastic cock on his codpiece then please tell them to just stay home. Unless they figure out a way to hide some sort of weapon in the big cock. We know that homosexuals are probably the angriest group of liberals right now, so we need them to be mad and gay, not just gay.