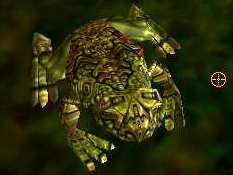 Nobody's made a realistic Counterstrike mod for Daikatana yet! Hurry up while there's still time!

This is also known as the "realism genre", but I hoped to capture the entire realism crowd by mentioning this one game because I know they all love it so.

As everyone knows, the entire FPS genre is modeled on reality. If it isn't realistic, then it sucks hard. Doom sucked. The Quake series sucked. Duke Nukem Sucked. Half Life was a little better, but still sucked because of silly flashy fantasy weapons like the MP5 (it wasn't realistic! It took half a clip to down a trooper!).

All of these game were intrinsically flawed because they weren't simulations of real life combat. Everyone knows by now that modeling games on real life, we produce the best games because if it's like real life it's good and real guns are good and shooting real guns at real people is good. Immersion = GOOD. Nice Game Design = BAD.

But how do you make a realism mod? Well, again, it's important that you stay well away from these factors:

Balance is stupid. It just means that if you're a good player, you don't get better weapons and armour with which you can dominate other players and never die. Skill just means that if you are crap, then you never win! That's not fair! Speed makes it too difficult to track people in your aim! No speed please, sir!

Here are a few features that will help destroy any remnants of silly skill, stupid speed, and bloody balance:

Realistic damage: This means that if you are shot in the head, you always die. But hey! This is a realistic game, so if you get shot ANYWHERE, you die! If you are shot in the leg, you also have to slow down, because being shot hurts. This means that if you shoot someone once, you never have to move your aiming reticule again, because they can't move out of your aim! That's VERY helpful, don't you think?

Random Aim Offsets: It's not realistic to say that you ALWAYS aim your gun where you are aiming your view. That's just stupid! Since when does the direction you look in dictate where you aim your gun? This might be true if you are lying down and slowly taking aim on something, but not if you are trying to move! It's unrealistic!

From now on, guns should NEVER hit where you aim because that is more realistic if you suck at aiming guns in real life. This means that:

a) Good players do not have the whole "skill" advantage thing over bad players.

b) Bad players do not have to aim directly at other players to hit them, which makes it more fair.

c) You might get a lucky head shot! That means that newbies can aim in the general direction of an enemy and kill them with a single random shot to the head, no matter how skillful either party is. You see? It's FAIR. For centuries, games have been won and lost on the throw of a dice... why change now?

It's important that every weapon has a random offset, including the sniper rifle(s).

General Slow Speeds: The Doom marine ran at about 90 miles per hour. That's not right! People realistically run at 10 mph! Geeks are fat and run at 2 mph! Only geeks play computer games, So make everyone slow. It will also make tracking targets easier for poor newbies who only play the game once ever.

Money For Winners: It goes with out saying that if you shoot someone, you get money for it. It's realistic. You should make sure winners always get more stuff than other players so that they can dominate the losers. That way, you don't have to wait for the match to end to see who wins - the team to win the first round invariable goes on to dominate, which is good, because it's realistic.