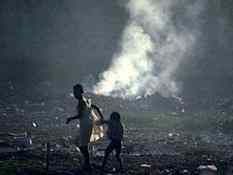 "Our Raft of Freedom we were constructing has gone horribly wrong."

51. Bad guys often keep vending machines in their base. Usually the same vending machine that you buy soda from will also sell clips of ammo. (submitted by Greenmarine)

52. Humans in a game must have a very limit set of things to say. Place the most important thing at the end of the list, because the person will repeat it every time the player walks nearby. (Submitted by Greenmarine)

53. Evil bad guys like to place doors ten feet above the floor of a room and then litter crates around the area to slow oncoming attackers. (Submitted by Greenmarine)

54. Evil bases and city areas often have walls that look like doors but don't open. (Submitted by Greenmarine)

55. Good level design is key. Try using any kind of metal on the walls, ceiling, and floor of your room to give it a realistic industrial look. (Submitted by Greenmarine)

56. Important NPCs cannot be killed no matter how many rockets you shoot at them. (Submitted by Cliffy B)

57. The world is made up of three different types of people. The good guys (us), the bad guys (them), and the people that run in circles like morons screaming "dont kill me". (Submitted by Maxence Muller)

58. Fans make people fly when jump over them because they are magical, and can somehow create a wind powerful enough to shoot a guy with two tons of various guns about 100 feet in the air. (Submitted by Maxence Muller)

60. All women have big tits and wander in the streets in bikinis. Ugly women only exist in foreign countries. (Submitted by Maxence Muller)

61. Most evil bases / prisons use a single mainframe computer to control one door; find this computer and you've got it made! (Submitted by DCurrie)

62. All alien motherships can be destroyed by killing the head alien, who is required by alien law to have at least one "ultimate form" he can transform into after being hit with enough rockets. Alien motherships are made this way because, obviously, without the head alien's superb leadership and amazing defense strategies (both of which can be easily bypassed by one soldier with a starting pistol), it would be laughable to think that the alien invasion had any chance left of succeeding whatsoever. (Submitted by Joe Irby)

63. If your base has security cameras and alarms, make sure that after an enemy is spotted by the security cams, the alarm turns itself off after 60 seconds of noise, just like real world security systems. (Submitted by John Fulmer)

64. If a guard cannot find you after the alarm goes off, make sure that he goes back to exactly what he was doing before the 60 second period. Even if you've set off the alarm 50 times before, he knows (like REAL guards) that there COULDN'T be anyone there. (Submitted by John Fulmer)

65. Female specific body armor only protects the breasts, sholders and shins. The stomach is left bare because stomach shots take forever to die from, so it is better to put the armor in a location it will do better, like the C- breast metal cup that somehow fits all women. (Submitted by Todd Fallert)

66. All enemies will die in one of no more than three ways. They will either crouch over and moan, fall backwards while holding their torso, or explode into hundreds of juicy gibblets. Most will die in the latter manner, as bodies tend to burst outward when shot or hit with a crowbar. (Submitted by Imortus)

67. In the event that the player is not wearing a distinct uniform, the bad guys will automatically know he is the enemy because he isn't standing around doing absolutely nothing like they are. (Submitted by Nexus Scorpion)