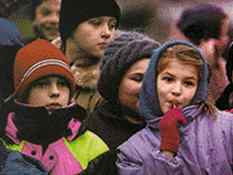 "Although we live in a country that is landlocked and has no access to an ocean, we could still hypothetically get on a raft and attempt to reach the shores of America."

31. Enemies will have (at most) one evasive attack, which they will never use at the appropriate times, often shrewdly electing to roll into walls or take cover behind a small stone.

32. Unlike you, bad guys only carry a single weapon. You're the only person in the entire universe that can carry more than one gun. Bad guys, on the other hand, have an infinite supply of ammunition and the aim of a blind child with Down's syndrome.

33. Every object, item, and entity only has two states of existence: "destroyed" or "not destroyed". There are no intermediate states.

34. Only the most pointless of objects are destroyable: toilets, mailboxes, trashcans, bottles, etc etc. They often contain useful items such as healthkits and clips of ammo, which other people felt the need to store inside them for some unknown reason. Perhaps they were in a hurry to a big important meeting, and carrying around a bunch of bullets would just be a "faux pas".

35. When jumping, the player's character should make a sound like he's critically constipated. This is used to alert the player to the fact that he hit the "jump" key and isn't simply defying gravity and floating into the air for no readily apparent reason.

36. Every enemy organization has an "experimental prototype weapon" that's kept under top secret security. This weapon, despite not being complete, should still be fully functional and cause high amounts of damage to whomever its used on. "Top security" means its locked behind an iron door (or a laser wall), and the only key resides on a tough bad guy with facial scars and a rocket launcher.

37. If the main character has an NPC partner, the partner should be ineffective and constantly offer essentially useless information. Example: player is standing in front of a destroyed bridge. NPC partner should radio in, saying "Oh, the bridge has been destroyed! Looks like you'll have to find another way in!" He will offer no additional hints or suggestions. Bonus points will be awarded if the sidekick radios in after the main character dies, commenting, "Looks like you've been killed!"

38. Rockets for bazookas are small and lightweight. The player should be allowed to carry a whole bunch of them, perhaps in his parachute pants.

39. Fires are localized to the immediate area. If there is a fire, it will either stay in place or shortly extinguish itself.

40. Destructible walls are the ones that have cracks in them. Even if you're facing a wooden door, and shoot it with a rocket launcher, it shouldn't blow up unless it has a crack in it.

41. Money is essentially worthless. Everything of value should be found laying on the floor or behind secret walls (except for items in really high rafters and platforms).

42. The only thing bad guys carry is their guns. They leave their wallets and jewelry inside their lockers so they are able to run around in place like idiots better.

43. Halogen and fluorescent lights are indestructible. This is because the electric company wants to protect their investments, and bad guys' bases generate a few billion dollars per month in electricity bills.

44. Although guns should not usually fire underwater, players should be able to club things to death with melee weapons. This is because water is magical and has no frictional properties.

45. "Complex puzzles" means "stacking boxes in order to get to a higher elevation for some reason." As a general rule, the better items and shortcuts are higher up.

46. Although players should not shoot the civilians / innocent people, you should make them so obnoxious and obtrusive that they will really want to.

47. Attack dogs should have the exact same AI as the human bad guys, only they should move slightly faster.

48. The government is ALWAYS evil.

50. Players should have some intense gravitational attraction either to or from ladders. Getting on or off them should be an incredibly complex task, second only to trying to swallow the Statue of Liberty.