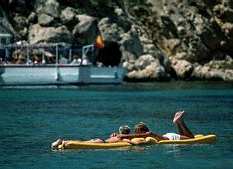 Hey you shitfuckers, get off that raft! You're already in America!

68. Under no circumstances can the player turn his head independent of his body. (Submitted by Xidus)

69. All high-ranking villains must possess some sort of idiosyncrasy that distinguishes them from everybody else around. A peculiar pet, speech impediment, odd fashion accessory, desire to seize power wherever it may be, etc. will do the job nicely. (Submitted by Dan Dargon)

70. All enemies of the hero must have the same 3 voices and 7 things to shout, barring the high-ranking villains. Aliens and the undead may utter random muffled grunts or piercing screeches. (Submitted by Dan Dargon)

71. All calendars in a game must feature bikini babes alongside cars or the beach (editor's note: especially if Charlie Wiederhold is on the mapmaking team). (Submitted by Dan Dargon)

72. If the hero is a member of an army, squad, unit, or protective force, all teammates must die except those with a masterful grasp of the obvious. "The boss must have the key to the next floor!" (Submitted by Dan Dargon)

73. If you run out of level design ideas, just make some stupid platforms that move around in midair. This way the player actually wastes a lot of time getting over these platforms, giving him the impression that the map was big. (Submitted by [SAK]LEED)

74. Characters that fall off into space must scream loudly as they fall, just in case the game scientists figure out how to make sound travel through a vacuum. (Submitted by Eric Lee)

75. In accordance with the industrial look given in rule #55 by Greenmarine, be sure to hire only industrial music artists to score the game. We all know that if real life had a soundtrack, it'd be written by rivotheads. (Submitted by Eric Lee)

76. Every other FPS game that is released must feature ventriloquist people. These characters do not move their mouths when talking, but instead make up for it by wildly flailing their arms about, as if controlling an invisible dummy. (Submitted by Peter Bridger)

78. Armor comes in only one style: wifebeater. Also, it will protect head, limbs and torso equally well, even in lava and outer space. (Submitted by Ignatz)

80. Although the bad guys may have an indestructible metal to make their doors, pipes and railings out of, under no circumstances should their robots be built from this same metal. (Submitted by Adam Sawkins)

81. It is perfectly acceptable, when designing a base, to put the button to open the door to the main control room 3 stories down, behind armed guards, in a sewer filled with deadly tentacles. The door will only, of course, stay open for 60 seconds. The journey from the button to the door should take no more than 45 seconds. (Submitted by Adam Sawkins)

82. You can still reload a bazooka while climbing a ladder. This also applies to ropes. (Submitted by Adam Sawkins)

83. Once the main character has entered a dungeon or military base through a certain door, it immediately fuses shut and can no longer be used for any purpose at all. (Submitted by Crisis)

84. The lack of visible guards in the same room as an important object is directly proportional to the number of hidden or enclosed guards nearby. Example: if there are two Gigantium Ripper Sentinels stationed in front of the yellow keycard, the keycard can be retrieved safely. If Ed from accounting is stationed in front of the yellow keycard, you will be crushed like an anemic mosquito the instant you step into the room. (Submitted by Crisis)

85. Obsidian is not the strongest material known to man - brushes are. (Submitted by Crisis)