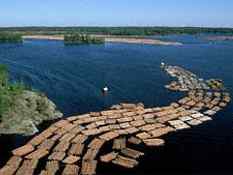 Look at all those rafts! Imagine the number of children that could fit onto them!

13. Enemy aliens often want to destroy the Earth because they've been driven insane from the flashing green and red colored lighting aboard their spacecrafts. All alien rooms and structures should have at least five light sources, each pulsating with a different bright color. This creates "atmosphere".

15. Bad guys, by nature, are real jerks. They should simply stand around and act like nothing has happened if their buddy, who was right next to them, is shot and killed.

16. Bad guys can either fight or flee, but NEVER both. Once moderately wounded, an enemy will run in the opposite direction of their aggressor, regardless of the area they're running into. If they come to an impassible object, they'll run in place. If they're confined to such a small area that they are unable to run in place, they will try to clip through nearby walls and brushes.

17. Standard grenades should never be able to kill anything, unless the player is somehow able to throw it directly underneath the enemy, and the target is already critically injured.

18. "Common" items, such as candy bars, sodas, and water fountains, should only heal up a maximum of 2 points per use. Disregard the fact that in your game, getting shot in the arm by a rifle can be completely healed with 10 candy bars or so.

19. It is not unreasonable to think that one man could kill 80 people in under an hour.

20. Enemy soldiers should be too stupid to know how to properly use teleporters (by walking into them). As a result, they should simply run around near the teleporter, as if to say, "where the hell did that guy go?!?" If they were smart, they'd be on the player's side, not the bad guy's team.

21. All explosives flash before detonating. This is to prevent accidents wherein somebody would be holding a lump of C4, unaware that it was activated (mostly for the sake of the bad guys, because they're so dumb and all).

22. Bad guys should be incredibly brave. Upon the first moment they spot the main character, they should immediately head towards where the person is located, disregarding all possible forms of protection and cover. "Not wanting to be shot at" is for sissies and landlubbers.

23. Bad guys with big weapons are ALWAYS fat and lumbering. Bad guys always appear as if they've existed solely on a diet of donuts and lard for 30 years in order to build up that "I'm fat and love wearing metal protrusions from my skin" look. The ratio of "damaging weapon to bodily weight" is always proportional. (submitted by Hellchick)

25. There is only one functional button for every gigantic computer console. Shooting the computer terminal will not result in any noticeable difference, except perhaps the console looking "dirty". These computers are merely for show and have no actual function.

26. Companies only produce two sizes of crates: "large" and "really large". Large crates are used to ship small items like syringes, and really large crates hold slightly less small items, such as a clip of 12 bullets. (submitted by Hellchick)

29. Trees are nothing but a large, brown stump with two intersecting sheets of two-dimensional leaves. Bushes are simply crates with a "leafy" texture applied to them.

30. If an item is pushable (yet cannot be destroyed), you will more than likely have to use it to stack on another item and climb up onto something.