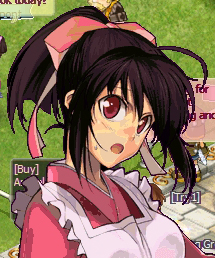 The questgiver looks as clueless as I am.

Character creation consisted of four models to choose from: two females and two female looking males. Adding a creepy vibe, each character winks or smiles at the thought that you would actually want to be them. I named my sexually diverse character "HarryAriel" so that my confusion could radiate to those I crossed while on my virtual journey. Still unsure if I picked a male or a female character, my confusion would soon shift as result of a cluttered screen welcoming me to the world of Goonzu. After closing a few dozen windows, a quest projected itself into the middle of my screen instructing me to collect onions. A few minutes later I found another beginner quest that wanted me to kill three thousand rats. Oh the joys to be had in mindlessly grinding on rat after rat in order to progress to the esteemed rank of "rat killer."

I found the oh so coveted onions on evil raccoons that didn't look evil at all and pretty much went about their business until I walked up to them and smashed their faces in with a rock. The combat system in this game is "click on an enemy and wait until it dies" and for the ten levels I played, it never changed. Hardly any difference in enemies and no abilities or skills, I just went from raccoon to raccoon hoping that something exciting would eventually happen. Honestly, the good folks at Goonzu should have titled this game, "Clicking and Waiting" as a fair warning to those foolish enough to consider playing it.

Every time I managed to click on an enemy which eventually died, it squealed some annoying gibberish that I couldn't understand nor cared to. Now nothing more than a mindless zombie, my only actions consisted of clicking and moaning in pain until a "RARE ITEM GET" window jumped out at me, knocking me backwards and over my chair. Initially I thought I conquered the odds. All the teasing and everyone telling me that nothing would ever be accomplished by a loser that played crappy video games all day would come to an end... or so I hoped. Disappointed and heartbroken to see that the celebration was not for me, I discovered that apparently the window appeared every time someone else found a rare item. 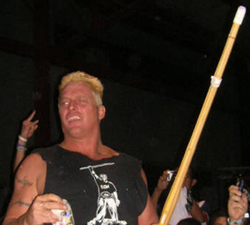 With my kendo stick I will defeat any enemy that comes before me!Eventually I received a bamboo "sword" that reminded me of a kendo stick. At this point I did not see any rats but it didn't matter, for now the time had come to club more evil raccoons. After an hour of bashing their furry brains into oblivion, I fell down some hole and found a colony of Mushroom Boys. Without hesitation, I greeted them by demolishing their stupid little mushroom heads with my massive bamboo stick.

The mushroom zone's background music, Santa is Coming to Town, annoyed the hell out of me. Not so much because the song sucks, but due to the fact that no Christmas decorations existed in the area. Furthermore, nothing indicated that the developers knew anything about Christmas and decided to appeal to Americans by remixing possibly the worst Christmas song that exists.

I found my way out of mushroom land and stumbled onto a strange looking fortress which I would have to travel to multiple times in order to complete twenty eight mandatory tutorial quests. Most of the quests existed to teach me how to use a market and a bank and whatever other useless crap I could have figured out on my own. It wouldn't have been so bad if the developers possessed the foresight to place the quest giver in the same town. 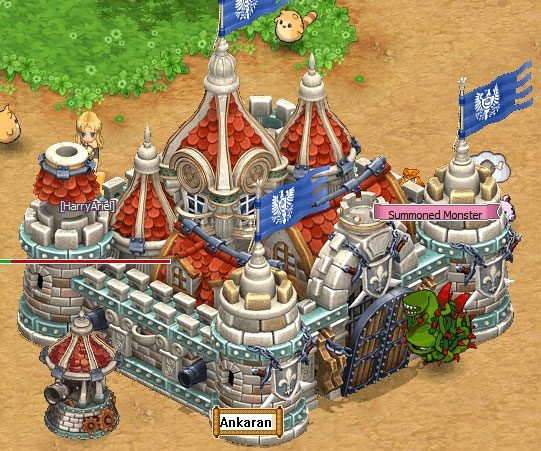 Hey think we could fit another cannon somewhere? Those raccoons look pretty shifty.

I traveled back to the mushroom kingdom but took a different route and found hundreds of pink rabbits. The sounds the rabbits made interested me as I did not know what a rabbit truly sounded like. According to the Goonzu developers, rabbits make cat sounds when you attack and kill them. Now I don't know much about Korea or it's wildlife or even anything about rabbits but I am pretty sure they do not sound like cats.

Feed... me...My character never stopped complaining about hunger nearly the entire time even after I tried to eat some carrots that the rabbit-cats dropped. However, the game informed me that carrots are for animals and that HarryAriel would rather starve than sink to the level of eating the disgusting orange roots. I would not be instructed to buy food to eat every six minutes until completing tutorial quest number twenty five. I blew all of my hard earned mushroom money on shish kabobs and engorged myself until my character shut up.

Every time I leveled up I was treated with some chimes and the sound of a horse. I still don't know why I needed to hear a horse every time I advanced in level but I also don't know why rabbits sound like cats in this game. Goonzu is as much a game of logic as it is fun and it occurred to me that asking logical questions was absurd. Tired with the same, boring game play I ventured to the Goonzu community in hope of spoiling myself with some exquisite fan art from adoring fans.