"Alien Arsenal" is no different. In the first few seconds of this film, we're treated to a really exciting car chase, and I was just on the edge of my seat while watching a Station Wagon attempt to outrun a 1982 Toyota through the back alleys of an abandoned industrial park. A lot of big budget, "professional" movie production companies opt to use fast, sleek, expensive cars for their car chases, but only Full Moon Pictures knows what the audience really wants to see: Station Wagons traveling at speeds up to 30 miles an hour!

After that riveting scene, the video moves from a "car chase" to a "person chase", where some jocks run through a high school, trying to catch a geeky kid and beat him up. They go about as fast as their cars did. After running for about 553 miles through the school, the jocks / preps finally catch the geek, insult him, demand his lunch money (I'm not making this up), and punch him. The bullies walk away laughing, and our geeky hero mutters, "Man, I hate those preppy buttheads!" This is Oscar-caliber writing, folks.

Ralph, the male geek, is friends with a female geek named "Baxter". These two are dorky because they wear ugly clothing, and their outfits are comical and caused me to chuckle! Ralph wears glasses, and that is funny because only dorks wear glasses! Ha ha! Baxter dresses like a lesbian and that is humorous because lesbians should be mocked and made fun of! Ha ha! Ralph reveals he has the hots for Felicia, the superhot and superstupid girlfriend of "Flash Gunderson" (played by a clone of Mike Nelson). Yes, "Flash Gunderson". I was amazed at how consistently the movie was able to keep up this level of stupidity. Flash says things like "I'm going to rip off your head and spit down your neck!" I think this was supposed to be meant as a threat, but I was laughing too hard to really think about it in detail. A crippled and braindead swan would be more threatening than this guy. 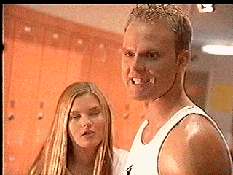 Oh no, Mike Nelson is pissed! Watch out, Crow and Tom!

Anyway, while clearing out and renovating the basement of the school, the two geeks stumble across a mysterious room which nobody ever noticed because there were a few bricks in front of it. They are able to access the room by putting their hands on an image of a three-fingered hand, at which point the door opens, revealing a storage of complex and highly destructive plastic alien weaponry and armor. Any person who has a hand can open this door, which makes me wonder how critically stupid the aliens were. What's the point of putting the palm-print lock on the door if anybody can open it? Was it meant to keep out dogs, cats, or some other animal that lacks hands? If so, why were the aliens afraid of pets? Perhaps they were intimidated because puppies would have a better chance of conquering the world then they ever will.

The geeky kids take every alien item they can find, and somehow manage to fit the whole arsenal (see title of movie) into a couple bright red duffel bags, presumably so they won't attract attention. The aliens, who were just cruising around the universe in their flying saucer, somehow detect that their impenetrable weapon supply depot was breached by a couple kids with the combined IQ of a cinder block, so they decide to "take on human form" and come down to Earth in order to implement their three-pronged attack plan, which consists of:

1) Getting their weapons back,
2) Destroying the Earth (as aliens, they are obliged to destroy the Earth),
3) Being defeated by two idiot kids.

So the aliens disguise themselves as three Billy Joel / Duke Nukem wannabes so they can walk around Earth undetected (well, undetected by stupid people). Despite the fact that they look like they're 30 years old, the aliens are somehow able to pass themselves off as "the new kids" in school, named Phil, Bill, and Jill. Their names rhyme and this is funny! Ha ha! Wherever they go, they travel right next to each other, keeping in stride and moving robotically. This is how you can tell if somebody is an alien. Creatures from another planet, who are smart enough to makes ships that travel at a velocity faster than the speed of light, are always too stupid to figure out how to walk like a normal human. If you see somebody who walks like they have a wedgy or a stick up their ass, I would recommended shooting them - you may just save the Earth! The aliens also have superhuman strength and alien powers, which they use to break Coke bottles and walk in slow motion. As Baxter said, they're "total creepazoids!"

One of the bullies finds the duffel bag of guns, and manages to shoot himself with a goofy looking pistol. It creates a distinct "alien" special effect, which consists of every single available filter / plugin available on the editor's warezed Video Toaster. Ralph asks Baxter what kind of pistol the jock shot himself with was, and she calls it "a zap gun." Woah, slow down movie, all this tech speak is too much for me! Please explain it in terms I can understand, I'm not a scientist!