The dorks experiment with the alien crap and blow up some barrels in an abandoned industrial park. The whole scene was obviously an excuse to make shit explode up so they could take pictures of it for the preview and movie jacket. Ralph puts on some magic Satanic alien gloves and instantly turns into "Gay Robot Cyberdork". Soon the bad aliens show up and start shooting their filter plugins at the kids, who elect to run away. Ralph, being the world's largest idiot, somehow still thinks the "new kids" are human beings, despite the fact that they're shooting pink laser beams at him and talking in weird voices. He confirms this by saying, "Did you see that? The new kids have GUNS! I've heard about this before. Like, kids who attack other kids because of their sneakers." I think at that point I vomited for the 183rd time.

Since the aliens can't travel faster than a casual saunter, Baxter and Ralph escape by running away like little idiots. Next day, at school, they're looking through their Duffelbag o' Destruction and come across some kind of X-ray binocular device. Since our heroes rival many forms of plankton in the "raw intelligence" department, they discuss how they could "make a fortune in Poker" with the X-ray device. Needless to say, I started praying harder that these kids would be murdered by rabid wolves.

Ralph uses the goggles to see that somebody is trying to rape Felicia, so he turns into Space Nerd and uses his superhuman strength to hold his arms in the air while the rapist jumps over him and falls into some desks. The girl, who was threatened with rape and death by the bad guy, responds by saying "thanks friend!" and kisses him on the cheek. After shooting the rapist with his "zap gun", Ralph starts thinking about how he's so cool, just like his hero, "Captain Cozmo", who is some crappy drawing he made. Ralph turns into Space Nerd again and foils a crime by pushing down a burglar in a malt shop. He also threatens Flash Gunderson by threatening to blow him up if he doesn't become a nerd and study a lot. So, not wanting to be blown up, Flash starts wearing idiotic clothing and acting like a bozo. Since he's a dork, he makes comments like, "I just got 'Dungeon Master 4' on my PC! It ROCKS!" This made me laugh because "Dungeon Master 3" hasn't even been released yet, much less "Dungeon Master 4"! Then it made me cry because I realized I'm a bigger dork than Flash Gunderson. Then it made me angry because I was being forced to sit through this movie. All in all, it wasn't a very pleasant experience. 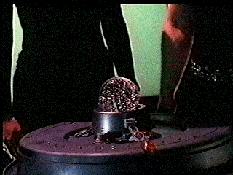 The aliens recruit a idiot jock / preppy kid / rich kid / idiot kid / awful actor kid to beat up the Space Dorks, since the aliens have a combat skill of an armed goldfish. The evil Cyberjock fights the Space Dorks and manages to get all their guns back and deliver them to the aliens, who claim they are waiting for "Earth to align with our planet so we can download the Armageddon Beam." Downloading the "Armageddon Beam" is supposedly a bad thing, and if you see some file on the Internet named "armageddonbeam.exe", you probably shouldn't download it. The big, ultimate, grand finale consists of Ralph punching some guy named "Monty", and an evil alien crystal starts to shoot evil alien crystal beams into the evil aliens' alien bodies. It's just one big special effects orgy of stupidity that could only amaze a four-year old who's never been exposed to television or human beings or light before.

So I think what I'm trying to say is that this movie lacks quality. The writing, acting, "special" effects, and plot all seem to have been improvised on the spot. Oh yeah, speaking of "writing", I'd like to list the most memorable phrases from this film, lines that will undoubtedly become lodged in the uterus of your mind until the day you commit suicide.

"You three space cadets want to take a poke at me too?" (Monty yelling at aliens)
"None of these girls would've given me the time of day in a watch factory." (Ralph referring to the fact he's a loser)
"Sweet creamery butter!" (Some teacher's cry of alarm)
"Who in the Wide World of Sports are you?" (Shouted by same guy as above)
"How's about a knuckle sandwich from Fist City?" (Pseudo-Mike Nelson threatens Ralph and makes me laugh uncontrollably)
"They're freaky space gizmos!" (Baxter referring to the various weapons of mass destruction)