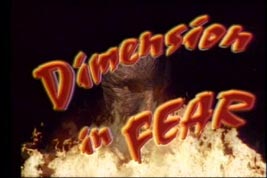 The Case For: Hearkens back to a time before Ted V. Mikels went completely insane.

The Case Against: Before Ted V. Mikels was insane, he was just plain terrible.

Years ago we reviewed a movie called Corpse-Grinders 2, written and directed by Ted V. Mikels. The movie was utter garbage, and everyone in it looked like they wanted to die, but it was easy to write Mikels off as a harmless old kook. More recently, we examined Female Slaves' Revenge, in which the gloriously mustachioed Mikels cast himself as the star in his own twisted sexual fantasy film involving being stomped on by black women in high heels who are valiantly trying their best not to cry. That movie pretty much solidified Ted V. Mikels as a complete lunatic in my book. But he wasn't always a total whackjob, or at least, not on camera. Mikels has been making movies for over 45 years, and today we take a look at a time when his sexual deviance was reserved for the occasional weekend rendezvous with a hooker on PCP, and his movies were more socially acceptable, yet still appallingly bad.

Netflix was kind enough to provide the following description of Dimension in Fear:

Justice has been a long time coming for a true-blue detective who's been tailing his ultimate nemesis, an escaped serial killer bent on destroying everyone who got him locked up in the first place. He's out for blood, but the cops aren't going down without a fight. 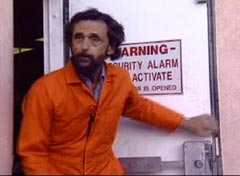 Tommy Chong is on the lam!The movie begins with the arrest of serial killer Cal Lewis. I will say this for Dimension in Fear - they did a nice job casting the role of Cal. He looks like the lovechild of Charles Manson and that most devious of terrorists, Yusef Islam. No matter what role he was cast in, this guy would look like he was just interrupted in the middle of raping toddlers with their own severed arms.

Now, considering that Cal was captured only days after escaping from a maximum security prison, you'd think the Texan police officers who caught him would want to take some extra precautions with the guy. Maybe keep him in solitary confinement, leave him in handcuffs, keep a few extra guards around anytime he has to be moved. That's because you skipped over the word "Texan." It came just before "police officers." Instead of treating this guy like the dangerous animal he is, the cops just toss him in the lockup with their other prisoners, two polo-shirted weenies. Only one cop escorts Cal into the cell, without handcuffs, mind you, and yet everyone is surprised when something goes wrong. Cal kills the cop (who, for the record, goes down without a fight) and then pulls off a miraculous escape. And by "miraculous escape," I mean, "he walks out the open cell door and leaves through the unlocked, unguarded back door of the jail. 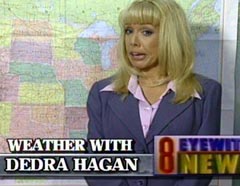 "Today's forecast: papercuts, y'all!"Elsewhere in the Lonestar State, the local news team says a fond farewell to Dedra, their horse-faced weather girl. I'm not casting aspersions on the quality of her meteorological insight, but the girl's got teeth that make Giada De Laurentiis look like Gumby. She also tells the weather on an unfolded road map of the United States thumbtacked to the wall. Dedra is about to leave for a bigger job opportunity in Las Vegas, the place where a weather girl can go to dream of green screens and news anchors with an actual desk.

At this point, we're introduced to Detective John Mays. He does seem pretty ticked off when he gets a call saying that Cal Lewis, whom he put in prison himself, has escaped again, but it's not an "ultimate nemesis" sort of ticked off. It's an "aw man, I wanted to take a personal day" sort of ticked off. Mays springs into action, telling the officer who called (after being patched through by Super Saiyan Fran Drescher) that he'll be in first thing tomorrow morning. Way to take charge, Detective. When he finally does show up to work, his actual status as a detective becomes suspect, considering the placard on his desk says "concierge." In any event, he does actually contact some of the people who testified against Cal in his original trial, including Cal's twin brother Ralph, and& well, okay, he only contacts Ralph. He does try to contact Mellie, a waitress, but gives up after one failed attempt. He doesn't even bother contacting a psychiatrist, the horrifying Dr. Anjhi, who ends up being the only one that Cal actually kills.

Despite his ineptitude, you might be fooled by the presence of a detective into thinking that he will be the protagonist after all. Don't feel bad, it's a natural reaction. Unfortunately, Detective Mays is only a side character, at best. The real protagonist of the movie is the horse-faced weather girl. 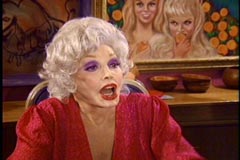 I now finally understand the meaning of the word "Lovecraftian."Dedra gets a psychic reading from her friend Monique, and old crazy person who hangs around the TV station. Monique warns her that grave danger awaits in her future. Well, no shit. Dedra may have teeth for days, and she may occasionally whinny, but she is still a young blonde with cantaloupes in her bra whose only friends are old and repulsive. That means Dedra is subject to Schwartzfeld's Law of Serial Killers: