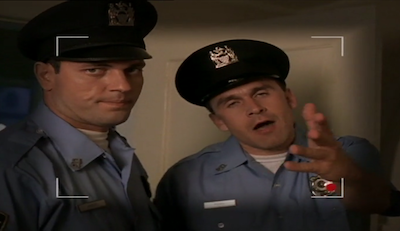 To be clear, the future kids aren't just tacked on to Aliens in the Wild Wild West; they're working hard in every scene to make the movie worse by rattling off as many pointless 90s-isms as they can. The sister runs around in blue jeans and cleavage and sluts up the 1870s frontier with no consequences because watch out liquored-up gunslingers, she's a latch-key kid! Her brother Macauley Dullkin doesn't even get that far - he just kind of stands there and spouts references to Nintendo and Pepsi and random suburban pop culture no one has ever heard of everywhere he goes, yet oddly enough, nobody seems to care. At one point he gets handed a high-powered rifle by the actual ranch hand who owns it and is an actual sharpshooter capable of using it, based solely on the statement that The Insert Trademark Kid "spent hours playing Doom on the internet". And that's only the tip of a massive iceberg of high-fangled future technospeak:

Every goddamn scene he delivers the same horseshit in that worthless monotone, and not once does somebody come to their senses and ask "Hey Jim, just what the fuck is a TV, anyhow?" or "Why are all of your references so inappropriate and confusing to us?" Basically, he's Captain N with no abilities, no peripherals, and even less charisma (and no streetwise dog even, which is a major points deduction here frankly.) And instead of getting sucked into a TV to hang out in all his favorite video games and watch Simon Belmont jerk off into a mirror like Patrick Bateman, he's sucked into a deserted Old West re-enactment set to hang out with the ghosts of the leftover extras of the last piece of shit 3-day budget Western shot here by some idiots who have no understanding of what narrative or structure are but think it's pretty shucks-darn cool the way them tumbly weeds go through the swingy doors into the sa-loon. Oh, what we wouldn't give for Christopher Lloyd to appear and hit that kid right in the life-hole with a primo cameo shotgun blast.

On top of all of the usual Canarom insanity, AitWWW adds in some extra meta-weirdness by virtue of the fact that it came out in 1999, less than two months after the slightly more famous Wild Wild West. If that's a coincidence, may a cackling, sawed off Kenneth Branagh show up with his giant mechanical spider and strange ideas about male grooming and just raze everything in sight to the goddamn ground. There are some definite parallels with that other movie, like the fact that the screen chemistry between the protagonist kid and his teenage skank sister rivals that of Kevin Kline and Will Smith in the original. At a deeper level, the aura of stifling indifference re: Will Smith's skin color in the 1870s USA of Wild Wild West is strikingly reminiscent of (but much less annoying than) the complete and utter willingness of every random yokel in Aliens in the Wild, Wild West to just instantly mentally gloss over whatever VCR-flashing-twelve airpump booster pack high top futuristic CD-ROM gobbledy-gook the I Don't Know What Time or Place This Is Kid is spitting out every time he opens his word hole.

Aliens in the Wild, Wild West at least makes more sense than Shapeshifter - we'll give it that - but it's also arguably the worse movie of the two. Certainly it's the less watchable. It definitely lives up to the Canarom tradition of being an insane amalgamation of completely disconnected ideas, so we're starting to suspect that every Canarom movie is basically Robo Vampire, i.e. a weird mash-up of disparate movie chunks that makes no sense because they ran out of money to finish any of them individually. Either way, we'd rather spend a thousand years in midget clipart hell than have to experience any of this again - especially the fucking dance party. Enjoy!