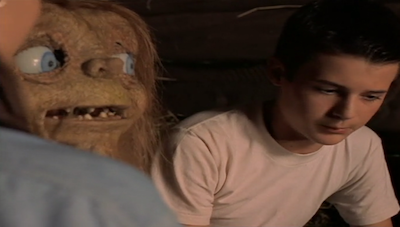 If all that doesn't make you wanna just scarf down a freezer-size ziploc full of percocets and go lie down on some train tracks already, well...let's just say it doesn't exactly get better from here. We don't want to delve too far into the supple tapestry of narrative that is AitWWW, mainly because the whole middle act is about as exciting and fast-paced as watching Abe Vigoda decompose through a Photron camera, so we'll just point out that the production crew made a bad situation worse by cramming way too many animatronic features into the aliens' already grotesque scrotum faces, to the point where it constantly looks like they're gulping down sheets of blotter acid while taking the special after-hours Willy Wonka boat ride through a psychedelic time-tunnel directly into Timothy Leary's kaleidoscopic asshole every single time their mouths move (which is 130% of the time they're on screen, naturally.)

So far we haven't even touched on the whole time travel subplot, which is mainly because it has no relevance to anything else that happens, ever. Nothing in this movie requires the skills and knowledge of two dumbass teenagers from the 1990s, but there they are in every scene: a couple of acid-washed chodes hopped up on pre-Adult Swim afternoon cable cartoons, radically polygonal jam-squirting candies, and secretly only-semi-ironic excitement toward the uncomfortable commercials for talking WWF pillow pals they project as surrogate father figures inside the endless closed feedback loop of scribble chuck coolness they rock skullwise instead of brains, because they're hood like that.

We suppose the idea was somehow that modern kids would be more open to making friends with alien monsters, or maybe the mule-driven travelling casting caravan over there is only capable of producing shithead caricatures of pseudo-American teenagers with all their gentle white sass mouth and calculator watches chock full of edgy capitalist entitlement.  And yet, the local non-threateningly rugged cattle wrangler really doesn't seem to need much encouragement from the disposable revenge-fuck C-plot understudies for Melrose Place before he's ready to jump into the crashed alien spaceship and start shaking hands with what appears to most human eyes as Satan's Avatar made flesh. 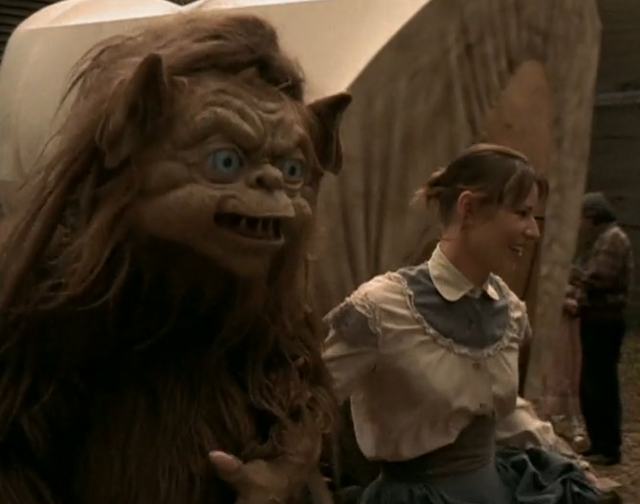