The Amazing Wizard of Paws 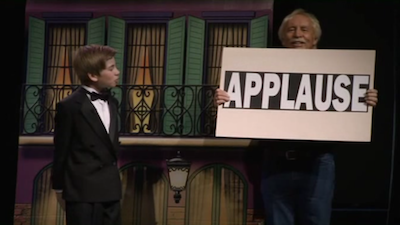 As a bleak omen of stupidity to come, the movie begins with two winded renn-faire beardos jogging slowly through a forest (this is supposed to be a life-and-death chase scene, we think, but them stopping several times for breaks to leer creepily at each other makes it kinda hard to tell, frankly.) Eventually they stop next to a random tree, where the evil Lord Gargleguns finally catches up to his quarry, the wise and senile Zazasphorous, who we'll be referring to exclusively as Blandalf the Grey, because fuck that name. Lord Gargamel raises his wand (non? sexually) to blast his opponent to smithereens, but then instead changes his mind and just sort of stands there while Blandalf banishes himself and the magical book of ultimate power to another plane of existence (read: whitebread suburbia), while a random nearby dog looks on in confusion. In fact, every wizarding fight in this movie can be pretty accurately summarized as "orgy of terrible CGI while dog looks on in confusion." Like this, for example:

Check out that sick John Woo akimbo wand no-scope-spell 360x420^69 action. As you can see, the mantle of white wizarding (such as it is) has passed on to Bobby, an emotionally crippled suburban child of destiny who looks far too similar to Haley Joe Osment for anyone's comfort. Blandalf, now reincarnated as Obi-Non Ohnobi, tells Bobby that the book contains the power to "destroy the world as you know it", followed by some weird and deeply confusing metaphors which we're pretty sure not even he understood before wandering off from dementia while rambling about his cheese sandwich.

Bobby accordingly wields this power with extreme care and responsibility, which is to say he uses it for fucking with middle school bullies, cheating away his math homework, cloud feng shui, and the forbidden levitating art of quicheomancy. Speaking of -omancies, he also briefly considers dipping into the rich, full world of necromancy so he can revive dear old dad to play non-dead catch with again, before Gandog the Wise shuts that shit down by telling him he can't because that's not how magic works or he's too much of a pussy or something like that.

But mainly, Bobby (or "The Great Bobbini" as he likes to call himself, or "Bob-Weenie" as his eighth-grade classmates probably call him while stuffing him into lockers) uses his new world-destroying powers to cheat at being an ordinary magician, which is good, because he fucking sucks at that like you wouldn't believe. This is of course a brilliant plan, except that even when he's actually using magic, he still sucks at pulling off incredibly simple tricks that most 2nd graders with a magazine mail order Houdini kit from the 50s could pull off.

So basically, his limitless supernatural power is mostly used for pranks, chores, and talent shows that are all nice and easy on the special effects budget. And the occasional jaunt through time on the train from Back to the Future III to retroactively save his dead dad from a drunk driver, but let's not dwell on that, or even think about it at all, ever.