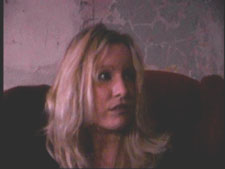 Note the concern on Karen's face. Oh wait, that's not concern. That's her being a bitch.

Back at their HQ - some abandoned building of some sort somewhere - Drexel and T-Bone explain the whole situation to Karen. Finally, all of my questions are answered! It's about time, too. I was just about to give up on this movie altogether. Here's the deal: Drexel saved T-Bone from his parents, who had been turned into vampires. You see, the last tall vampire died a long time ago. He was also Drexel's great, great grandpappy. So the vampire gene was in Drexel's family's gene pool all along, but it didn't pop up again until Drexel. The midget vampires can only turn other midgets into vampires, but the ruby on the end of their sword contains the blood of that last tall vampire, and it obviously can turn normal humans into vampires. Now the tall vampires can create tall vampires with their bite.

Now, like every single fucking vampire movie in existence, this one encourages us all to forget everything we've seen in vampire movies, like crosses, garlic, wooden stakes, and even the sun. In fact, if the movie thus far is any indication, these vampires refuse to come out unless it's broad daylight. Just once I would love to see a vampire movie other than "Dracula" or "Nosferatu" where the vampires actually live by the traditional vampire rules. Oh well. For what it's worth, vampire eyes (denoted by yellow contacts) are sensitive to sunlight, so they have to wear sunglasses all the time. Since none of the old anti-vampire tricks work, just how do you kill them? The only surefire way is with an injection of vampire blood. That's right, that red goop in the syringe was the blood of midget vampires. Now, theoretically, the only way to get midget vampire blood is from a midget vampire, which raises the question, if a vampire already has vampire blood flowing through his veins, why doesn't that kill him? There's no easy answer to that. There's no hard answer, either. In fact, there's no answer of any kind, but what really matters is - OH MY GOD, THERE'S A SPIDER ON YOUR CHAIR!

Marcus shows up at the hideout, but this time he's not looking for a fight. He wasn't really looking for a fight last time, either, but they make a big deal out of it anyway. Marcus and Drexel agree to team up in order to stop Ray from spreading vampirism across Georgia, and Marcus offers to share his weaponry. Hmm... a hairy older white guy providing weapons for a half-breed vampire hunter. That's just plagiarific! Marcus speculates that if midget vampire blood won't kill Ray, maybe tall vampire blood will, so Drexel kindly bleeds copiously. Just how copiously? I can't say exactly, expect to say that every tall vampire that dies from here on out dies courtesy of a syringe full of his blood. Keep that in mind as you read on. 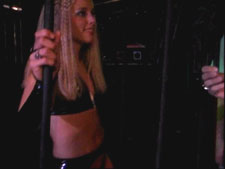 She's eye candy, no question about that. I still despise her.

Elsewhere in Georgia there is a party in full swing. We see about five minutes of kids raving around like idiots, and the camera keeps cutting back to a blonde stripper, which makes perfect sense to me. The party is broken up by Ray, who bites a whole slew of ravers. Not only does that turn them into vampires, but I'd have to imagine that Ray takes in more E than the audience at a Daft Punk show. The crowd scatters, screaming. Unfortunately, while the microphone may be almost completely unable to pick up dialogue, it is more than capable of picking up lots and lots of screaming. This is the only point in the entire movie where I actually have to turn my speakers down. The clipping is so bad, I feel like it must have damaged my speakers somehow. If it did, I'll expect a full replacement from Adam Minarovich. Drexel and Marcus appear on the scene before things can get any more out of hand. Ray escapes, but the two hunters have their hands full with the score of new vampires he created. Now it's just Drexel and Marcus against a room full of - wait, what's this? Oh yeah, the stripper is still there, too. For all intents and purposes, she might as well be related to Ray and Karen, as it is evident from the first poorly written words out of her mouth that her pleather outfit can act circles around her. Drexel and Marcus make short work of the vampires, but just think about how much of Drexel's blood that had to take. Just come up with a rough figure. Got one? Good. Keep that in mind for later.

Meanwhile, back at the hideout, T-Bone and Karen are enjoying some quality time looking at each other and wishing someone would just make a damn entrance already. Unfortunately for them, when someone finally does it's one of the midget vampires. T-Bone rushes to Karen's defense, but as we've previously discussed, for all his courage, T-Bone is essentially useless in a combat situation as anything other than a somewhat mobile gunrack, so naturally he loses quickly and efficiently. 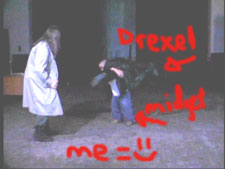 Okay, it's funny again! Sorry the picture quality sucks, so I added some diagrams to make it easier to understand. That being said, BWAHAHAHAHAHA!

When Drexel and Marcus return to the hideout, they find that Karen is missing and T-Bone has been turned into a vampire. With his new vampiric strength, T-Bone picks Drexel up, lays him across his shoulders, and spins around like a whirligig. Now, that, my friends, is funny, and not just because it gave me an opportunity to use the word "whirligig!" The whole midget thing stopped providing laughs for a while there, but all of a sudden, here comes T-Bone with a comedy body slam! Bam! Take that, Drexel! The laughs keep coming from vampire T-Bone, although only for another fifteen seconds. he may be stronger, but the little bastard still can't fight. He goes down fast and he goes down hard. Ah well. As Drexel and Marcus bury T-Bone in the backyard (the nice thing is, the hole only has to be three feet deep! Ha!), Drexel gets a call on his cell phone. It's the midgets. They have Karen, and they want to meet. They arrange a showdown for the next day, naturally in the morning.

In preparation for the upcoming battle, Marcus calls in another vampire hunter, the Cowboy. The Cowboy arrives in the fashion of the pioneers of the Old West - via do-it-yourself helicopter. You know this guy is a rough cowpoke because he has a large hat and, oddly enough, not much of an accent. In a cast where everyone sounds like the staff of a Krispy Kreme, the Cowboy is probably the biggest yankee in the bunch. So, on the side of humanity there's Drexel, Marcus, the Cowboy, and of course Edgar. As they get ready to fight, there are plenty of slow walking sequences. Although Edgar also arms himself to the teeth, he is conspicuously missing from these shots. The camera always just cuts over to him to show that he has, in fact, moved. Four men, about a thousand syringes of Drexel blood, and a whole lot of guns. As for the vampires, Ray pays a visit to a biker bar and bites everyone inside. When the vampires show up at the chosen battleground, a wooden plank storage facility, they look like the annual Hell's Angels parade. Ray and the midgets hang back as the rest of the vampire horde advances on our heroes. The good guys draw their guns and aim into the mob. The first volley couldn't possibly miss. It's the clearest show anyone could ever hope for. So naturally, none of them fire and they instead wait for the mob to walk right up to them and start punching. 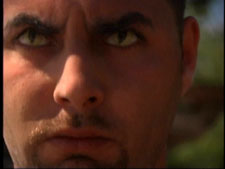 The battle that ensues is very dramatic, by which I mean it sucks. As you could probably guess, the four good guys manage to kill everyone but Ray and the midgets without sustaining a single scratch. So that's an entire motorcycle gang of vampires taken out. Add that to your figure from before. All I'm trying to say is, that's a metric fuckload of blood for Drexel to give up, that's all. Two of the midgets go down easily enough. Marcus finds Karen, who was never even in the scene up until now. I don't know where she was, and I don't care. For a woman surrounded by the undead and a huge amount of gunfire, she's completely calm, even bored. You could argue that she's not a horrible actress, she's just in shock, but then I'd have to do unthinkable things to you. At last, it's time for Ray and Drexel to have a rematch. It goes about the same way that it did last time, except that this time Ray gets his hands on one of the syringes, and he uses it on Drexel. For some reason that I will never understand, this makes Drexel vastly more powerful and causes his face to morph really lamely, most likely via some sort of Corel program. I'm serious about that. Drexel gets injected with his own blood, and it makes him more powerful than ever before. Makes perfect sense! After that, Drexel makes short work of Ray, then takes out the lead midget with a flying syringe. This fight is over. The Cowboy wants to kill Drexel right then and there, but Marcus convinces him to let Drexel go with the following argument: "Let him go." Works for me!

Cut to nine months later in Atlanta. A little girl sits on the sidewalk, playing with her dolls. The last remaining midget vampire, who managed to escape the battle, creeps out from behind a wall. Instead of a little girl, the midget gets a facefull of gun, courtesy of Drexel and Marcus, partners in vampire hunting. To the extreme!

By all rights, "Ankle Biters" should be a hilarious, tongue-in-cheek satire. Midgets are basically a golden ticket to Laugh Town. They're surefire entertainment. So my question is this: WHAT THE HELL HAPPENED? Is it that hard to put together a script that caters to the strengths of your cast in a situation like this? They're tiny! They drink blood! Fucking run with it! As much as I hated the majority of the actors in this movie, I place almost all of the blame for everything wrong with this movie squarely on the shoulders of Adam Minarovich. Although, to be fair, a significant chunk of that blame should go to James Holcomb. He has triple billing in the credits. In his role as producer, he's James Cameron Holcomb. When he's playing the Cowboy, he's Jim Holcomb. As the movie's composer, he's Jamon Holcomb. I hate him, too. The music in this movie isn't even that bad, except for the damn theme song, which is also played over the end credits. For such a low budget production, the music is actually uncommonly good. It is always fitting, and never louder than it needs to be (again, with the exception of the damn theme song). Truth be told, this is one of the cases where I wish our rating system was a little different. I want to give this movie a few points in its favor for music, but the other sound problems - sound effects that are way too loud and dialogue that is way too soft - are so godawful that I have to give it a low score. All of the other low scores are a result of my unending hatred.