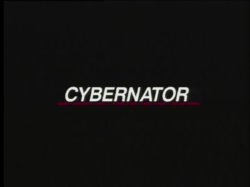 Overview: A renegade cop must track down a group of deadly cyborg assassins while performing every possible permutation of facial muscle contractions.

The Case For: Allows you to absorb every action movie cliche known to Western cinema in only 84 minutes. Oh, and there's some breasts about halfway through.

The Case Against: Deathly boring, obvious plot twists, terrible directing, main character looks like he should be hamming it up on "Models, Inc." Wait, he did. 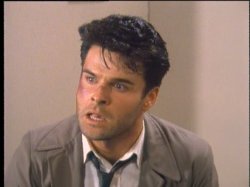 Officer Brent C. McCord showing off expression #472.I don't think I am doing anyone a disservice by coming out at the very start of this article and revealing that "Cybernator" is a total piece of shit. A combination of factors, including the scores of reviews of other shitty movies on this site, not to mention this website's very name, make the revelation that "Cybernator" is an terrible piece of American cinema entirely unsurprising. If you somehow came upon this page expecting a glowing review of an obscure early-nineties sci-fi piece of masterwork, you're going to be sorely disappointed.

Watching "Cybernator" made me wonder what draws low rent auteurs to the sci-fi genre in the first place. Of all possible styles of movie to make, futuristic sci-fi is the one which more or less screams for some semblance of a professional production. Hell, you don't need to be poor and inexperienced to make a bad sci-fi movie. Huge companies pay hundreds of millions of dollars for that privilege all the time. If you want to make an action film and set it on the streets and alleys of Los Angeles, why not just actually set it on the modern day streets and alleys of Los Angeles? Why must you pretend it's set in two-thousand-and-whatever and make the actors suffer the indignity of having to wear cheap Halloween masks while they deliver their hackneyed dialogue before dying in a hail of fake laser beams somehow shot out of a plastic Uzi?

The movie opens with a sleazy senator returning to a ratty apartment with a hooker in tow. Almost immediately it's obvious that this is some sort of almost incomprehensibly bleak future: not because the senator is a crass, womanizing drunkard, which is perfectly normal, but because the hooker is immensely fat, ugly, and stupid. If this woman is the best that a United States senator can trawl for, either American power has been completely obliterated, or fat, ugly women have been successfully fetishized, something which will be expounded upon later in this review.

Soon enough, when the senator returns from the kitchen with two more drinks, the hooker is lying on the bed convulsing. Apparently this is a futuristic pre-mating ritual because the senator drops his drinks and pulls off some of his clothes before jumping on top of her prostrate blubbery form and doing a little dry humping. Suddenly there's a synthesizer sting as the senator realizes that the hooker's throat has been cut, and as he looks up, he's surrounded by three cyborgs. 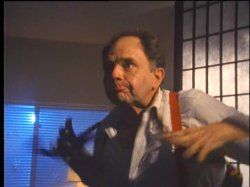 Nothing gets a senator hotter than a fat dying hooker.Two of the cyborgs are just random idiots with plastic glued to their face, but the third, "leader" cyborg is obviously special. I looked him up and it turns out the actor is actually a stuntman or something, because his acting manages to stand out in a movie full of worthless actors as being especially worthless. At first I thought this was "the" Cybernator because his picture is on the cover of the movie, but later it turns out his name is just Bob. Imagine a tall, lanky member of the Blue Man Group with a southern accent who wears a rain poncho. Then, to make him extra menacing, there's a bunch of long tubes coming out of the bald cap and disappearing under the poncho somewhere. Scared yet? The senator pleads with the three cyborgs, who kill him after one utters a clever line: "You were looking to get fucked tonight, Senator? Well, you are definitely fucked!" I think I smell an Oscar. No wait, that's my own bile.

The scene shifts to an alley outside a strip joint, where we are introduced to the hero of the movie, Brent C. McCord, a renegade cop with nothing to lose who breaks all the rules to get his man. It's possible that he is the single most clichéd character in the history of movies. Here's just a partial list of things he rips off. I'm going to prematurely spoil the movie here, but do you really care? No, of course not.

McCord is a scowling square-jawed scoundrel with enormous hair and a five-o-clock shadow, which even physically makes him an amalgam of the heroes of several other successful movies. Additionally, he obviously has a severe neurological disorder that keeps him from maintaining one facial expression for more than two seconds, and which becomes more severe in times of stress. Over the course of the movie he achieves 712 different and distinct facial postures, some of which have never before been recorded. Here's a small sample of what I mean:

Partner: "Let's go into the strip club."
McCord: (eyebrows go down, then all the way up) "All right, (eyes squint) but (chin juts forward) you're (left eyebrow goes back down) paying (opens eyes halfway) for it (grits teeth) this (eyes open wide) time!" (cocks head to left, entire face starts convulsing)