Eventually a bunch of the asshole students from Blackheart's class make it to the white wall and have themselves a little party, which, since this is a Dennis Devine movie, consists of making unwanted passes at one another and pissing each other off. This gives us a chance to really look at the area where Pirate Death buried his great treasure. I may be mistaken about this, but I'm pretty sure that the burial place of Pirate Death's treasure is the same goddamn backyard used in Curse of Lizzie Borden and Blood Mask. Is it so much to ask that Dennis Devine make one fucking movie without using this stupid house? 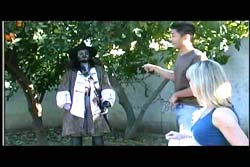 Pirate Death has a hard time being taken seriously. Maybe it's because NOTHING IS SCARY IN BROAD DAYLIGHT.Inevitably, the students discover Pirate Death's hidden treasure. The question ends up being not so much how they found it, but rather how nobody had found it until this point. It took a grand total of six seconds of digging to locate. And when they bring it into the light, it turns out that the treasure over which this horrible ghost pirate has been murdering people for a hundred years is not a chest full of swag, as the flashbacks would have led us to believe, but five gold doubloons.

ALL THIS OVER FIVE BLOODY COINS? OH, I GET IT. IT'S LIKE THAT MOVIE. THESE ARE JUST FIVE COINS OUT OF A THOUSAND, AND WHEN THEY ALL COME TOGETHER, HE BE ABLE TO STOP WALKIN' THE EARTH AS THE LIVIN' DEAD.

No, they're just coins. You can buy things with them. Or you could, if there were more than five of them.

Of course, now that people have touched his treasure, Pirate Death has to kill them. As opposed to when they just wandered around the general vicinity of his treasure and he& had to kill them. Soon enough, P.Diddy has whittled down the entire cast to just two people. However, when he goes to finish them off, he finds he just can't do it. It seems that Pirate Death's old lover has possessed one of them (and no, it's not Amber - she died pointlessly a few scenes back - there will be no continuity in this movie), or so he thinks. The "possessed" girl kisses Pirate Death, which turns him back into a human for some reason, allowing her boyfriend to smack his head off with a single swing of a shovel, because heads and shovels work that way. That's why your parents always made you shovel the driveway - they were trying to kill you. The girl then explains that she really was possessed and, in fact, had known that there was a pirate spirit inside her all along. She just never brought it up before this exact moment. The end.

THE END? THE END OF WHAT? THE BAD PART? DO WE GET TO THE KEEL-HAULING NOW?

Okay, Captain Manybeard, you want to take us home?

LET'S SEE HERE, WE'VE GOT US A MOVIE ABOUT PIRATES THAT HAS NO SHIPS, CANNONS, WATER, OR ACTUAL PIRACY OF ANY KIND. THE CAST BE MORE WOODEN THAN ME SHIP. THE PLOT CHANGES MORE OFTEN THAN THE WINDS IN A BLOODY HURRICANE WITHOUT EVER MAKING NEARLY AS MUCH SENSE. THE PIRATES ARE A DISGRACE TO MY MOST NOBLE PROFESSION, WITH NOT A FEARSOME SCOWL IN SIGHT, TO SAY NOTHING OF A SCURVY DOG GOIN' BY THE NAME O' BLACKBEARD WHILE GOIN' ABOUT CLEAN-SHAVEN AS TEN YEAR OLD GIRL. ALL IN ALL, METHINKS IT'S HIGH TIME DENNIS DEVINE WALKS THE PLANK. I BE GIVIN' IT TWO BEARDS DOWN.