The movie takes place in a small town that was founded by pirates a whole century ago. Just think of that! Why, that's so long ago, I can barely imagine it! It's no wonder that the residents of the town, who live in the shadow of a mountain called Pirate's Point, are unsure if their town's piratical founding is fact or fiction.

A CENTURY, DID YE SAY?

MEANING THIS TOWN WAS FOUNDED IN 1900?

AND NOBODY KNOWS WHETHER IT WAS FOUNDED BY PIRATES OR NOT? THERE'S NO WAY OF CHECKING THAT SORT OF THING? LIKE, OH, I DON'T KNOW, ASKING THE PEOPLE IN THE NEXT TOWN OVER, WHICH WAS PROBABLY FOUNDED FIFTY YEARS EARLIER? AHAB'S TEAT! WHAT MANNER OF BILGE-SUCKING FISHWIVES DO THEY HAVE IN THIS MOVIE?

That's right. Community college students. But not just any community college students; Dennis Devine (like his mentor Ford Austin before him) seems incapable of making a movie without resorting to the same premise - a bunch of meagerly foul-mouthed, cartoonishly horny and/or prudish drunks/drug addicts/teetotalers. In Devine's world, you can only be a whore or a puritan who is regularly ridiculed by whores. And this nonsense isn't just confined to the classroom. Even before, mammoth-chested student Amber (played by Syn DeVil, last seen as Topless Murder Victim #82 in Exterminator City) is already slutting it up, telling her equally vacuous friends how she's going to squeeze a good grade out of Professor Blackheart through seduction. To clarify her point, in case anyone missed it, she unzips her sweater to show off her cleavage. Unfortunately, she doesn't have any. Syn's gargantuan implants were installed by a doctor with either a nasty sense of humor or a case of hysterical blindness, because her concrete funbags are stuck too far apart to ever touch.

YARR! I BE FOND OF BUXOM LASSES, BUT THIS ONE LOOKS LIKE SHE'S BEEN LOOTIN' CANNONBALLS IN HER ARMPITS.

Now, this being a Dennis Devine movie, it's a safe bet that the students will just happen to be having a class discussing local myths, which will then turn out to be true when the students do everything in their power to get killed. And in fact, that's just what happens. Professor Blackheart is giving a lecture on Pirate Death, and how he may or may not have existed (he did; he founded their town), whether he was killed by a town uprising or a mutinous crew (varies from flashback to flashback), and where he buried his great treasure (on a hill about five minutes away). Being a gracious teacher, Professor Blackheart is sure to leave plenty of pauses in her lecture for her students to have lengthy discussions of how horny they are, how much they like beer, and how much fun it would be to go up to the hill and have sex and drink beer.

THESE WHELPS BE BEGGIN' FOR DEATH'S SWEET RELEASE, EH?

Pretty much. I mean, the only rule of horror movie survival they haven't broken yet is splitting up, but rest assured that they'll be doing that soon enough. All of the flashbacks to the long-forgotten time of a hundred years ago give us our first real glimpses of Pirate Death. 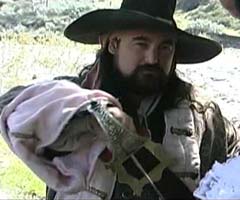 You just want to give him a hug, don't you? I think he'd like that.


Aye - I mean, yeah. The infamous Pirate Death, slayer of over a hundred and fifty men, is in fact a doughy man-child who looks like Joel Silver and whose voice is about as fearsome as a Raffi tape.

AND HE'S ONLY GOT ONE BEARD!

Yeah, there's that, too. Worse yet, Pirate Death turns out to be a complete softie who is betrayed by his crew for not being murderous enough. And this is a crew that includes Randal Malone playing a pirate called Blackbeard, despite not actually having any beard whatsoever. 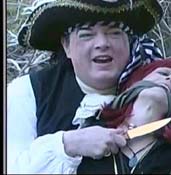 Grow a beard, you fleshy mutant!

YOU'LL LICK IT UP AND YOU'LL LIKE IT, YOU MANGY SON OF A WHORE! BY THE POWERS, NO BEARD AT ALL?

I'm afraid not. He does look like he requires the services of at least a half dozen nine year old boys to get an erection, though. Does that help?