After class, Amber goes ahead with her plan to seduce Professor Blackheart. Cut to a few moments later, and Amber is nude, tied up on the Professor's desk, and being tickled with the collection of brightly-colored feathers that Blackheart just happens to keep around for occasions such as this. Evidently, Blackheart gets off on watching students with bad boob jobs fake laughter while their tits firmly refuse to jiggle.

Bizarre and ultimately pointless fetish scene aside, one of Amber's friends takes her up the hill to where Pirate Death's treasure is supposedly buried. See, Amber bears a resemblance to a female pirate on Death's crew, reported to be the first female pirate in history.

WHAT? THE FIRST WENCH TO HOIST THE JOLLY ROGER WAS IN 1900? WHO WROTE THIS BARMY PIECE OF CODSWALLOP? A RETARRRRD?

Two of them, actually. The same retards who think that looking like someone means you must be possessed by their spirit. That's precisely why Amber's friend wants to bring her up to the hill, thinking that being in proximity to the buried pirate treasure will awaken the reincarnated pirate soul within her. I don't have the hard evidence, but I think it's safe to assume that this girl does not usually go outside without a state-appointed caretaker.

Amber eventually gets bored and wanders off, leaving her friend to search for the treasure herself. Now, in a hundred years, nobody has ever found the hiding place of Pirate Death's treasure. Despite that, pretty much every character in the movie finds the hiding spot with absolutely no difficulty. Perhaps it's because it's hidden behind a giant white wall in the middle of a landscape where nothing grows more than three feet high. People actually make plans to meet there. How do you make plans to meet someplace if no one knows how to find it?

YARR, THAR BE PLOT HOLES WIDER THAN A KRAKEN'S ASSHOLE.

But of course, the girl finds it, and of course, Pirate Death's ghost appears and kills her. And so it goes. one group of idiots after another makes their way up to Pirate Death's secret hideout under a variety of lame excuses and then gets killed when the ghost of ol' Deathie gets the impression that they're after his buried treasure. These excuses range from a horse-faced photographer who likes to use the hill as her backdrop, even though her models keep getting killed up there (this actually happens twice), to people meeting up for sex, to people straight up trying to tempt fate by openly flaunting the curse of Pirate Death. In fact, of all the people who go up the hill looking for the long-forgotten secret location of Pirate Death's treasure, only one person fails to find it - Ron Jeremy.

AT LONG LAST! I'VE BEEN WAITIN' FOR RON JEREMY TO MAKE AN APPEARANCE AND DRAG THIS SODDEN WRECK UP FROM DAVY JONES'S LOCKER. THE MAN IS MORE FIT TO PLAY A PIRATE THAN ANY SOUL ALIVE.

I wholeheartedly agree. Unfortunately, he doesn't play a pirate.

BY MY MANY BEARDS! WHAT A WASTE! THE MAN'S BORN TO CARRY OUT THE SWEET TRADE THAT BE SO DEAR TO ME HEART. WHY, HE'S ALREADY GOT A PEG LEG, IF YA KNOW WHAT I MEAN.

WE COULD CALL HIM "LONG JOHN SILVER," IF YOU GET ME DRIFT.

PLENTY O' GOODLY FOLK HAVE WALKED HIS PLANK, IF YOU SEE WHAT I BE GETTIN' AT. 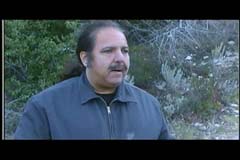 Finally, this movie gets some class.

SAINTS BE, YE GUTTER-BRAINED HORNSWAGGLER! WHAT'S WRONG WITH YE? I MEANT HE'S GOT A STIFF KNEE FROM PLAYIN' FOOTBALL IN HIGH SCHOOL, HE ENJOYS LOW-GRADE FISH DIPPED IN BATTER, AND HE LIKES TO ENTERTAIN IN HIS HOME, WHICH IS FITTED WITH BEAUTIFUL HARRRRDWOOD FLOORS.

PLUS HE'S GOT A PECKER LIKE A BLOODY MIZZENMAST.