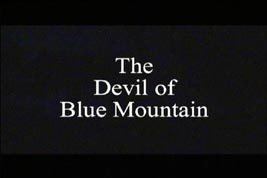 Overview: Two party girls are kidnapped and taken into the wilderness. But is their captor a killer, a rapist, or just a jerk?


The Case For: Complete lack of a script means no one can screw up their lines.

The Case Against: Complete lack of a script, among other things.


Now a lesson in interpreting the writing on your Netflix envelopes.

"This nightmarish horror movie's harsh realism is enhanced by the director's decision to shoot it in 2004 - during the throes of Hurricane Ivan."

Reasonable enough. What are they really trying to tell us? Let's break it down together, shall we?

Director/producer Joshua P. Warren is particularly proud of the Hurricane Ivan part. In fact, at the end of the movie, he gives special thanks to Hurricane Ivan in the credits. Yes, thank you Hurricane Ivan! Thank you for causing thirteen billion dollars worth of damage! Thank you for being the fifth most destructive hurricane to hit the Atlantic coast in the history of recorded Atlantic hurricane damage recording! I'm sure the fifty-seven people who died as a result of Hurricane Ivan can rest peacefully knowing that they didn't have a fence post driven through their skull in vain. Their suffering allowed Joshua P. Warren to create his masterpiece. Or it would have, if Hurricane Ivan was present in more than four minutes of the movie. 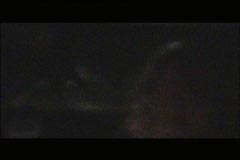 Did I mention there are some picture quality issues?Warren credits himself with creating the story for The Devil of Blue Mountain, but there is conspicuously no credit given to any writer. The end result of not having any actual script is a movie with a fairly small amount of dialogue. In fact, the number of scenes in which two characters actually engage in conversation can be counted on one hand, using only one finger. Trying to grab his audience early with brilliant tricks like "two people talking" and "rain," Joshua P. Warren puts those two startling details into the movie's opening scene.

Two girls, Meghan and Vera leave a happening nightclub (note: those names are never actually mentioned in the movie. The end credits actually have to identify them by the color of their clothing). Dashing to their car through the pouring rain (thanks, Hurricane Ivan!), the girls head off toward their next party destination.

Now, I will say this about the hurricane: Joshua P. Warren did luck out that the weather was so shitty on the night he filmed this scene, because if it had been clear, what happens next would be inexcusable. The girls are driving along, chatting and smoking a doobie, when they suddenly notice a light flashing behind them. Thinking it's the cops, although the light is none of the colors and half the strength of an actual police flasher, the girls pull over. So terrified of being caught with pot are they that they don't even question it when the "cop" who approaches the vehicle is not wearing a badge. Or a uniform. He is, in fact, wearing a denim jacket, the international sign of a serial killer. Nor do they question it when the "cop" opens their doors and pulls them out of the car without saying a single word. They just go along with it. In fact, neither of the girls thinks to make so much as a peep as the "cop" handcuffs them, gags them, and stuffs them into his trunk, all in complete silence.

When I first watched this scene, I crossed my fingers and hoped that the guy would kill these two idiots quickly, and then once they were out of the way, we could move on to the real main characters, who would put up much more of a struggle when they eventually came face-to-face with this madman. Sadly, I would not be that lucky. These are our main characters - in fact, our only characters - and they won't be getting any smarter as time goes by. 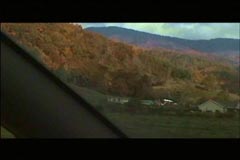 The shot from inside the car. Note how it is distinctly not a hurricane outside. The weather will remain beautiful for the remainder of the film.Now that the rain and the chatter are behind us, we can get to the real meat of the movie - long, painful traveling scenes. Joshua P. Warren loves traveling scenes. The opening credits are set to three and a half minutes of our mysterious kidnapper driving along a country road. Two hundred and ten seconds of hands on a steering wheel. And unlike the opening scene, where the complete lack of music just serves to underscore how our two protagonists put up no struggle whatsoever, this scintillating driving montage is set to one of the movie's two pieces of "music," a combination of belching and some nerd sniveling "De-e-e-e-e-l-i-i-i-i-v-e-e-e-r u-u-u-u-s-s-s-s-s fro-o-o-o-om e-e-e-e-e-v-i-i-i-i-i-il" over and over again. You know that part in the first Spider-Man movie, when Aunt May is praying, and the Green Goblin bursts in through the ceiling and she screams out the rest of the prayer and it's totally over the top and ridiculous, and yet still totally awesome because Rosemary Harris kicks ass? This is like the polar opposite of that, plus belching. Sadly, since the second of the movie's two pieces of music consists of what sounds like someone trying to tune a violin after huffing a pint of ether, this is actually the better of the two.